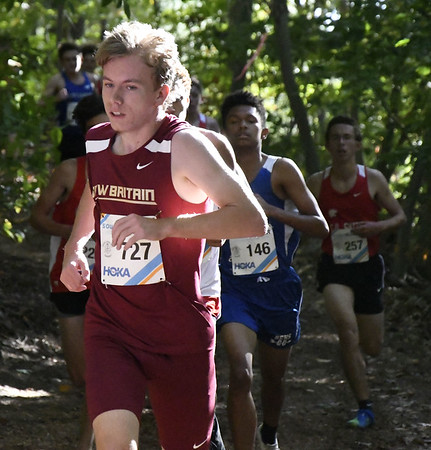 MANCHESTER - New Britain cross country's season of growing is near its peak.

With a solid showing at the Central Connecticut Conference Cross Country Championships, NB's boys and girls teams have a lot to look forward to going into the next few weeks and into next season. Noticeable improvement has shown the team is learning and getting better, and with a race like the CCC where the field is both strong and deep, it's a good measure for where the team is at in its progression.

"We're always looking for improvement. Some guys didn't run their best race, but a couple people did run better," said NB head coach Michael Zayas. "I think it's one of those things where it puts some things into perspective the things we stress and it gives the guys that are coming back next year things to work at."

Leading the charge for New Britain was Jacob Davis, who finished 103rd in the field at a time of 19:36.1. Behind him was Josiah and Alexander Santiago, who finished 123rd and 124th, respectively.

Further on down was Josh Davis, finishing 147th at 20:37.2, and Randy Opoku at 20:56.0 for 161st. As a team, New Britain's boys group finished 23rd in the running with a score of 619. In just the North Division, the Hurricane boys were fourth as a team with no scoring runner finishing worse than 25th.

The New Britain girls did not field enough runners to score as a group, but were still able to finish the race Monday ahead of a good portion of the field.

The feeling now with the state on the horizon is good, and with team's typically peaking around this part of the season, Zayas thinks there's still room for improvement after a nice day on a tough, hilly course.

"It's definitely positive. We had a great year. The big thing is, there's room for improvement," said New Britain head coach Michael Zayas. "This was a really tough course. I had no idea how difficult it is, but the kids did everything we asked them to do, which is as coaches is all we can ask for."