Berlin's Julia Salina (36) goes up and over a Bristol Eastern defender trying to play the ball with her head. | Dan Heary Buy this photo 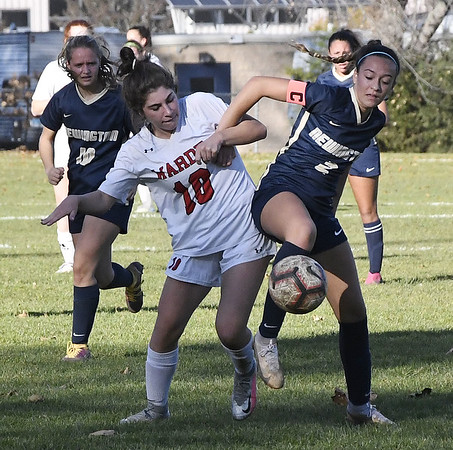 The Central Connecticut Conference girls soccer all-conference team was revealed this week and at least one player from each of the seven local schools earned a spot.

Twenty-three athletes found themselves on the team with Newington receiving the most selections with seven players picked.

Sadler was a midfield staple for Newington, appearing in 16 contests. She had two assists this season, matching Daniele’s total. Zocco appeared in all 16 contests as well, scoring one goal.

Newington finished the season at 10-3-3.

Also in the North Division, Abby Wasik was the lone New Britain selection as the junior helped the Hurricanes to a 4-11 record. Stats for Wasik and New Britain’s soccer team were unavailable at time of publication, and finished 4-11.

Julia Salina, Kylie Jefferson, Jocelyn Dimatteo and Natalia Chorzepa made up Berlin's picks in the South Division. The Redcoats concluded the regular season with a 7-4-5 record, but lost in the first round of the Class L state tournament in penalty-kicks to Guilford. Stats for Berlin’s four selections were unavailable at time of publication, with the Redcoats finishing with a record of 8-5-4 this season.

Stats for the Rams were unavailable at time of publication. Bristol Central went 5-10-1 during the regular season.

Ciara Collins, Cecelia Gilbert and Audra Porowski represented Bristol Eastern as the Lancers earned the No. 27 spot in the Class L tournament. Eastern lost to E.O. Smith during the first round, and finished the season 5-9-1. Stats for Eastern were unavailable at time of publication.

Plainville, the final team in the South, tallied two players in Nayelle Heredia and Ariana Clifford on the team. The Blue Devils had an 8-4-4 record in the regular season, but lost to Lewis Mills in the first round of the Class M postseason.

Plainville’s stats were incomplete at time of publication, showing Heredia had three goals scored in one game played. No stats for Clifford were available.

In the West Division, Southington recorded three selections in Jessica Carr, Nina Muir and Maya Wroblewski. The Blue Knights were the eighth-seed in Class LL, but lost to Darien in the first round of the tournament.

The Blue Knights finished 9-3-4 this season. Stats for them were unavailable at time of publication.