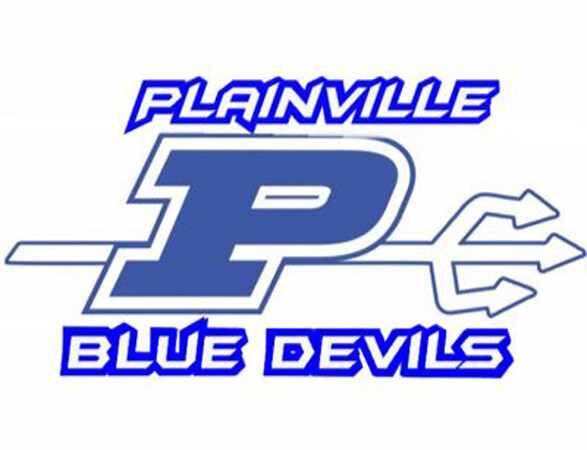 Owen Miller (14:36) and Ben Gerken (11:27) netted the first goals of the game, getting asssists on Hudson Hollander (on both) and Owen Miller (on Gerken’s).

Plainville netted its first goal of the game on a Brody Davidson score from a feed by Connor Konopka. The Terriers got on the board at 12:19 in the second period, making it a one goal game.

Hall answered back not too long after with Matt Ganey scoring at 10:27 off an assist from Owen Miller to make it 3-1.

The Terriers made it a one goal game again at 5:14 in the second period off a Gabe Boily score, with Davidson and Konopka earning the assists. Both sides were unable to break the scoresheet again for over a full period of action, with the sixth goal of the contest coming in the final minute.

With the goalie pulled to give the Terriers an extra skater, Ben Gerken scored his second goal of the game with 40 seconds to go to make it 4-1. Ethan Stagg earned the assist on the empty-net goal.

The loss is the second in a row for Plainville’s boys co-op team. They sit at 2-3 following the game.

Leading in scoring for Southington was Aidan Buck with 15 points. Luke Penna had 11 points and seven rebounds in the win, which marks two in a row now for the Blue Knights after they dropped four straight to open the season.

The halftime score was in favor of Weaver at 27-24, and was extended slightly through the second half as New Britain was unable to pull out a weekend home win.

Leading in scoring for the Hurricanes was Dennis Forbes with 13 points. Omarion Gadson had 12 points and Jackson Forte had eight points.

For Weaver, the leading scorer wasMadden Cupe’s 18 points. Mahari Taylor complemented Cupe’s scoring with 11 points of his own.

The Redcoat girls held Killingly to three points in the second quarter, entering the halftime break ahead 17-13. Berlin held the lead through the second half by outscoring Killingly in the third quarter, creating a cushion for the final eight minutes of play in the fourth quarter.

Leading the way for Killingly was Sydney Crabtree, who scored 13 points. Hannah Grudzien aksi was in double-digit scoring for Killingly with 11 points.

Newington 49, Trumbull 37: Newington girls basketball remained undefeated on Saturday, rolling past Trumbull 49-37 to win its eighth game in a row.

Newington led through the first eight minutes and never surrendered the lead the rest of the way, leading at halftime at 23-13 before extending the difference to 15 at the end of the third quarter.

Lilly Ferguson dropped 25 points, a game-high, with fellow Nor’easter Kendall Miller falling one rebound short of a double-double at 10 points and nine rebounds.

Trumbull had three players score 10 points. Emma Gentry, Sarah Stolze and Emi Roberto all tied for the second highest total on the team with Lauryn Wright leading the program in scoring with 12 points.

The Bristol Central Invitational wrestling tournament wrapped up on Saturday, with area teams competing their way to placing positions on the podium.

Winning the tournament as a team was New Fairfield with 142 points. Berlin finished third in the team points race with 139 points while Bristol Eastern (seventh, 89.5 points), Bristol Central (ninth, 75 points) and Plainville (10th, 71 points) also competed in the meet.

Berlin had a place finisher in all but one weight class, earning one first-place position in Nick Ebrahimi’s 195-pound bracket.

Ebrahimi had two matches and one forfeit. He pinned both his opponents, including Canton’s Christepher Dinneen at 1:38 in the bracket final. He took down Owen Broyles in his first match of the day as well.

Marco Marino (170), Tim Mrachek (182) and Hamza Mourabit (220) each wrestled into bracket finals, but fell in the finals to place second. Mason Arbolo (106) and Nicholas Koops (132) wrestled their way into a third-place finish as well, working back through consolation.

Eastern had two first-place finishera in Dylan Piazza at 182 and Alex Marshall ar 160. Piazza had wins by fall over Alex Lee of Pomperaug to start his day and Mrachek in the final, with an 8-5 decision win over Chris Bourquin of Avon sandwiched inbetween both matches.

Marshall, with the benefit of a bye, only wrestled twice. He won by fall over Cam Casey of Avon to face Jake Long of Hall in the final, winning a narrow 3-2 decision to clinch the 160 bracket.

Ella Nichols (152) worked her way to a final, earning a technical fall to open the day and a decision win to face Michael Carpenter of Pomperaug. She was pinned at 1:05 in the first period to place second.

A slim Central roster had all wrestlers place, with two of the four competing wrestlers finding themselves in a final. William Hamilton (120) cruised through the day, earning a bye to open the day before winning by fall in 1:04 over Harding’s Saral Luna. He then had a major decision win (9-1) over Brendan Mulvihill of New Milford. In the bracket final, he pinned Ethan Titus of Canton at 1:26 to win the class.

Landson Dionne also wrestled three times, earning a pin to start the dat over Eastern’s Thomas Vontell just before the first period closed. He then earned a 5-2 decision in the semifinals and lost to New Fairfield’s Thomas Bock in a 10-3 decision to place second.

Other wrestlers for Central were Landon Archibald (145) and Michael Thaxter (220), who worked back through consolation to a third-place match, but both were pinned in the first period in their final match of the day.

Plainville had one first-place finisher for the day in 285-pound Jeff Quirion La Oz. The heavyweight never worked past the first period, earning a semis win in 36 seconds and then the bracket title in 1:36 with a pin on Ajai Stackhouse of Hall.

Joseph Kennedy (145) had two pins to get him to his bracket final, taking down Sam Sorkin of Hall and Noen Jian of Pomperaug to take on Maximus Piel of New Milford in the final match of the day. Kennedy was unable to out-score Piel, falling in an 8-2 decision for second on the day.

Nicholas Dennis (220) worked through his wrestleback side of the bracket to earn third winning by fall over Central’s Michael Thaxter in a minute.