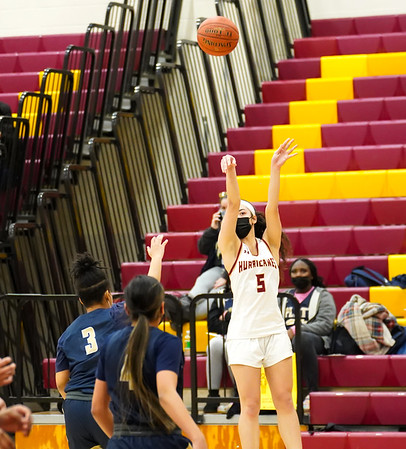 NEW BRITAIN - New Britain girls basketball led from the first score until the final buzzer on its way to its second win of the season, defeating Platt 47-33.

The Hurricanes’ defense was assertive and pressured Platt’s guards in a variety of ways to force turnovers. They took advantage of transition scoring opportunities and controlled the backboards to create second-chance looks. With Platt being a team built to succeed inside with forwards Khrystina Campbell and Antwanette Tann, the Panthers had no response to New Britain focusing on their best players.

A single basket from Tann was all that kept Platt from being shut out in the first quarter while New Britain began building a lead that grew as large as 19 points during the game. The Hurricanes added to their lead at the end of every quarter without ever letting the Panthers make a run to make the score close.

Platt’s offense picked up over the rest of the game as Tann and Campbell finished with 13 and 10 points, respectively. The two, however, combined for eight points in the first half and Tann had just four points entering the fourth quarter.

“They have two kids who can really score,” New Britain coach Beryl Piper said. “They can shoot the basketball and do some good things, so we had to focus on them. I felt that we really needed to put some pressure on them because they do make some bad decisions with their passing. We tried to keep the ball out of [Campbell’s] hands as much as possible because she’s their calming factor on their team.”

It was a collective effort from the Hurricanes to slow down Platt’s two best players. Not having anyone to contend with their size and strength, the focus on deny them the ball and boxing out limited how often Campbell and Tann touched the ball.

Faienza led the offensive attack for the Hurricanes with 17 points to go along with five rebounds and four steals on the defensive end. Fellow senior Layla Mejia was the other New Britain player to eclipse 10 points and finished with 11.

The offense was not particularly efficient, but the Hurricanes created far more shot opportunities than the Panthers because of New Britain’s rebounding dominance. They constantly took two or three shots on a possession, which gave them more chances at scoring even if their shots were not falling.

“Being able to try to create offense off some steals helps us with our tempo of the game,” Piper said. “We still missed a lot of shots, we missed like 47 shots, but we took a lot of shots which is a good thing. I’d rather have them take a lot of shots than them not shoot the ball at all.”