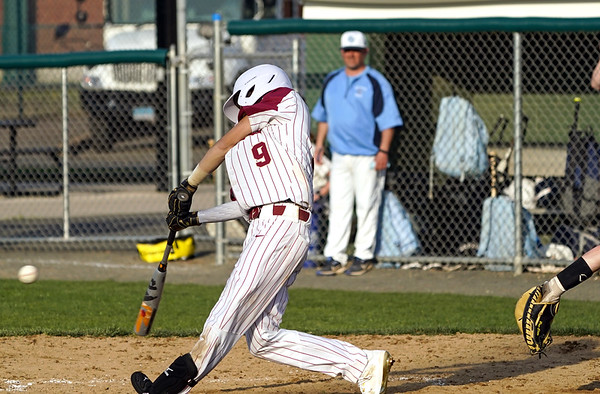 Dan Heary Gaby Roman produces the lone run of the game Wednesday for New Britain with an RBI single, his second hit of the day against East Catholic. Buy this photo

NEW BRITAIN – The New Britain nine played well but took a loss as it was outplayed by a talented East Catholic squad, 6-1, at Beehive Field on Wednesday afternoon.

"Alex did very well being a sophomore in his first varsity season and pitching against one of the best teams in the state," Plefka said.

New Britain made an effort in the bottom of the second inning with a single by Jomar Rodriguez, a sacrifice bunt by Emani Gonzalez and another single by Gaby Roman. Their offense for the inning ended at that point, however, with two stranded runners.

Heidel was replaced by Rodriguez and both teams had four hits, respectively, through six innings. East Catholic put two more runs on the board in the seventh, at which point New Britain put in another reliever. In the bottom of the frame, the Golden Hurricanes put a runner on, resulting in a sacrifice and Roman getting his second single of the game. This produced the lone run for the Canes.

Plefka was still optimistic about his team after the game.

"I thought we played well, and it is what it is as East Catholic took advantage of the little things."

The Hurricanes have potential as they have a freshman and three sophomores in the starting nine. They also missed some "live pitching" with a canceled game and rained-out practices.

The Canes' next game is this Saturday against Danbury in a non-league contest at 1 p.m. at the Hive.