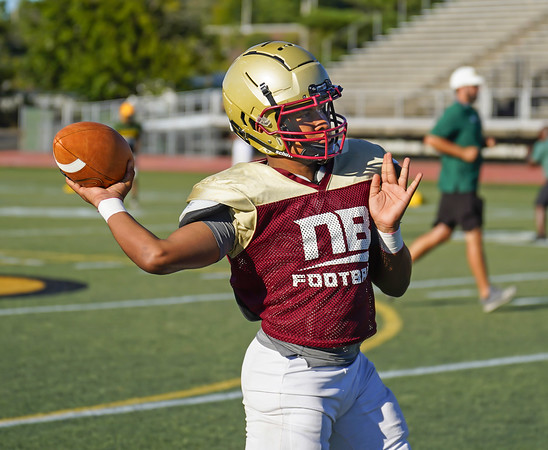 NEW BRITAIN – A 1-9 record for New Britain Golden Hurricanes head coach Isaiah Boddie was less than ideal in his first season at the helm of his alma mater in 2021. One year later, however, Boddie said his group has their eyes set on putting New Britain back on the map.

“We have really good leadership across the board,” Boddie said. “Our captains are doing a phenomenal job leading by example.”

With much of the team returning from the 2021 season, Boddie noted how impressed he’s been with his players’ ability to put last season behind them and change their mindset ahead of the 2022 campaign.

“As a team we’re night and day from last year,” Boddie said. “With our mental makeup and the way we work, the kids have done a phenomenal job turning the page the way they worked in the winter, in the weight room, in the classroom, in the community – it’s their mindset. We like to preach, ‘change your mind and your body will follow.’”

The Hurricanes’ identity in 2022 will have a large part to do with their line play on both sides of the ball. Boddie is leaning on both units to set the tone and play physical, hard-nose football. He went on to note that that offensive line could be the engine that keeps the team moving. New Britain is returning five starters on their offensive line from a season ago.

The line will be in charge of protecting sophomore quarterback Donavan Campbell, who’s back in his second season under center. When Campbell began the 2021 season, he was just 13 years old.

“He’s head and shoulders above his age and what you would expect with the mental makeup he has,” Boddie said.

Now 14, Boddie has been impressed with his young quarterback’s ability to be a field general and manage the offense.

As for the weapons around Campbell, junior Cayden Hill is a player who’s taken the next step into being an impact player on both sides of the ball at running back and safety in 2022.

“Cayden Hill will have a bigger role offensively with us this year,” the head coach said. “We always knew he had talent and physical traits, but the way he took on the offseason, he’s taken leaps forward offensively and defensively from where he was last year as a sophomore.”

Running back Cam Bond is another player who took big steps in the offseason by getting stronger. Bond is coming off an all-conference selection last season, but with another offseason behind them, Boddie believes this tandem could be a major problem for the opposition this year.

“They were good, solid players last year, but this year I think they’re going to take the next step and be a force to be reckoned with,” Boddie said.

The Golden Hurricanes begin their revenge tour on Friday at 6:30 p.m. on the road against Middletown. Their home opener will come a week later from Veterans Stadium against Windsor.