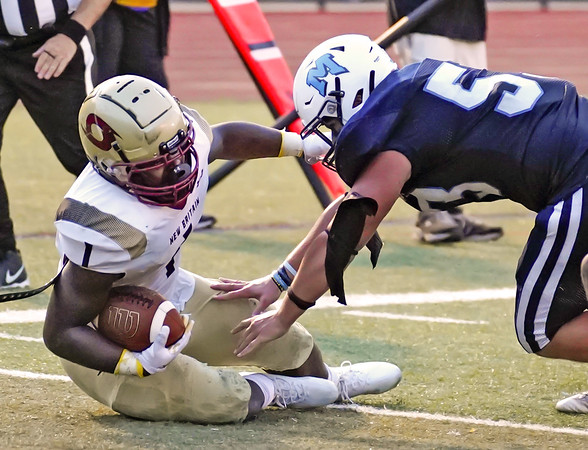 NEW BRITAIN – The New Britain Golden Hurricanes took a massive step in the right direction with a 38-25 win over Middletown in Week 1, but they have an even larger task in front of them in Week 2 as they welcome the Windsor Warriors into Veterans Stadium this Friday night.

Windsor is coming off a 21-20 loss at the hands of Wethersfield in a top-25 matchup. In this week’s GameTimeCT Poll the Warriors tabulated the 17th most votes and Wethersfield came in at 22. Windsor slotted in at No. 5 in the preseason poll prior to their Week 1 loss.

The Week 1 loss came down to a failed two-point conversion with 2:45 to go in the fourth quarter.

The Hurricanes’ top-two running backs rushed for 343 yards in their win highlighting the things that New Britain head coach Isaiah Boddie thought the team did well. The tandem is running behind a veteran offensive line which will serve as the strongest facet of their offense early on.

“We had a lot of spurts where we did a lot of positive things, but when we look back on the film, I’m already thinking we made a lot of mistakes,” Boddie said.

New Britain allowed touchdowns on four straight Middletown possessions last week amid a stretch of nine consecutive drives that ended in scores for both teams.

Although New Britain and Windsor have not faced since 2010, the Hurricanes did face three teams a season ago who at least received votes in the final poll of the 2021 season: Maloney, Hall and Southington. In those games, New Britain was outscored by an average of 44.67-10.

Albeit the Hurricanes also lost by 23 to Middletown a season ago and proved to be a much different product in the 2022 rematch.

The Warriors have had a lot of turnover on their roster from a season ago. They only returned four starters on each side of the ball after an 11-2 season including a perfect 7-0 in league play. Last year’s version of Windsor scored an average of 35.4 points per game and allowed 19.7 to opponents.

The Hurricane’s slow start and inability to slow Middletown’s offense a week ago is reason to have pause when looking at New Britain lining up against a top-25 team in Windsor this Friday. If the Golden Hurricanes are able to score first and play from ahead with Cam Bond and Cayden Hill this game could be closer than it may have originally looked when the schedule was released. Week 1 proved that New Britain is improved from a 1-9 season in 2021. Week 2 is a big test in terms of the type of resolve Isaiah Boddie and his team has this season. A little could go a long way for both teams in this matchup. After dropping 12 spots in the poll, Windsor could be in position to fall even further if they allow New Britain to hang around in this game.