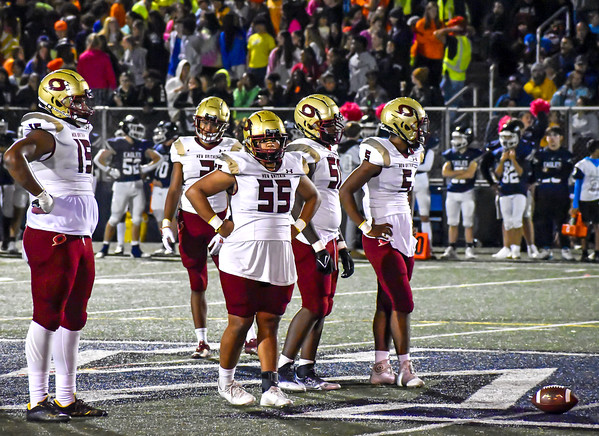 WETHERSFIELD – The New Britain Golden Hurricanes were able to clean up the penalties that kept them from a win last week but were unable to keep up with the old school running attack of the Wethersfield Eagles in Week 4. Wethersfield punched New Britain in the mouth from the start and never slowed down, winning by an eventual final of 35-8.

“They were more physical than we were,” said New Britain head coach Isaiah Boddie. “We’ve got to be able to line up and play football. They played old school, smash mouth football and that’s what it came down to.”

The Eagles got things started just a few plays into the night after forcing a fumble from New Britain on their opening series. Just two plays later, quarterback Camden Righi took a keeper 28 yards for the touchdown which was just the beginning of his action on Friday

New Britain was able to return the favor a few minutes into the second frame. Running back Cayden Hill took his longest play of the night 45 yards down to the goal line before punching it in for the score on the next play. He then lined up in the wildcat formation to convert the two-point try. The Hurricanes held their only lead of the night for about 11 seconds of game time after the conversion.

On the first play from scrimmage, Jova’n Hill responded with a 59-yard breakaway touchdown rush. The Eagles went ahead 14-8 on this score and never looked backed.

Big plays became a theme throughout the first half and Righi capped it off in such fashion with a 50-yard scramble for his second touchdown of the night. Wethersfield took a 21-8 lead into the locker room for halftime.

The second half took a quieter tone than the first, but Righi still had work to do. The quarterback ended each of the ensuing quarters with two more touchdown rushes to add to his total.

In the waning moments of Friday’s affair, he finally put New Britain to rest with an 11-yard rush to ensure a safe lead. The Eagles won by an eventual 35-8 margin.

The closest New Britain ever came in the second half was the possession prior to Righi’s final score. A 40-yard completion to Dameer Bailey brought the Hurricanes deep into Eagles’ territory with 15-yard personal foul tacked onto the end. The offense eventually stalled and turned the ball over on downs.

New Britain quarterback Donavan Campbell completed 12 passes for 142 yards in the loss. Cayden Hill paced the runners with 119 yards on 19 carries with a touchdown to his credit. Dameer Bailey racked up 48 receiving yards with Elias Rodriguez not far behind at 45.

“Offensively we were up and down,” said Boddie. “I thought there were plays that we could’ve made. We’ve just got to continue to be better.”

The Golden Hurricanes fall to 1-3 in 2022 and will continue their road stretch next Friday at South Windsor.