Plainville has daunting task against RHAM 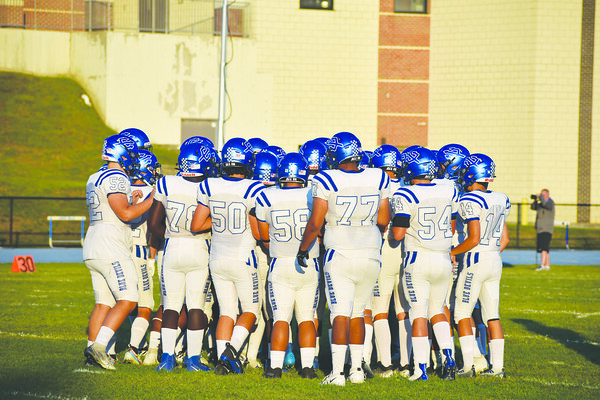 Cameron Beall | Staffl Plainville is seen here in a huddle. The Blue Devils will be facing RHAM on Friday. Buy this photo
Published on Friday, 7 October 2022 12:30
Written by Cameron Beall

PLAINVILLE – The Plainville Blue Devils find themselves in the basement of the CCC Tier 3 after Week 4 and will have their hands full once again when they welcome the RHAM Raptors into town on Friday, adding another high-profile opponent for the Blue Devils.

In the previous games between Bloomfield, New Fairfield and Platt, the Blue Devils have been outscored by an average of 44.7. Last week’s 42-7 affair with Platt was the first time the Blue Devils were able to scratch points across since Week 1 at Lewis Mills.

The Raptors currently stand at 3-1 with their only loss coming to the first-place Berlin.

A week ago RHAM was at home against Farmington and ran away with a 69-39 victory highlighted by a monster day from senior Max Nylen.

Nylen rushed for 375 yards and seven touchdowns in the win. He was the recipient of the only completed pass for RHAM that day which went for 29 yards.

The senior also made an impact on the other side of the ball with a 72-yard interception. He finished his day with 507 total yards.

This performance only solidified what had already been a great season through the first three weeks. That marked his third game with more than 100 yards rushing.

The back has 84 carries, 770 rushing yards, nine touchdowns and averages 9.2 yards per rush.

The Blue Devils will need a complete performance to keep pace with the Raptors on Friday.

Their high-powered offense is averaging 29.8 points per game, but their defense has proven to be vulnerable at points through the first four weeks.

RHAM has allowed an average of 28 points to opponents thus far.

Using the passing game to their advantage was one of the initiatives Plainville head coach Tim Shea put forth to start the year.

Things went sideways when starting quarterback MJ Bakaysa went down in Week 1, but Dom Abarno has been learning on the fly to try and keep the operation together.

The Blue Devils were still able to lean heavily on the passing attack in Week 4 against Platt.

Despite the loss, Abarno got his work in with 130 passing yards making up 83% of their offensive production last week.

Things have been spiraling for Plainville trying to make their way through a very tough portion of their schedule, and this week may present even tougher following a 69-point win for RHAM.

The Raptors will certainly be riding the momentum of a 404-yard day from senior running back Max Nylen in Week 4.

The writing on the wall doesn’t look good for the Blue Devils in Week 5, but they’re back at home which should provide a slight edge in that department.

Head coach Tim Shea has been all about taking positive steps in practice to translate to positive plays and drives which will eventually turn into wins.

Plainville was able to end their scoring drought last week, so this could be a decent spot to simply build some confidence offensively against a defense allowing 28 points per game.