Courtesy photo Martin Kellogg Middle School students pose for a picture in front of the National Archives Building in Washington D.C. during their May 2019 trip. Buy this photo 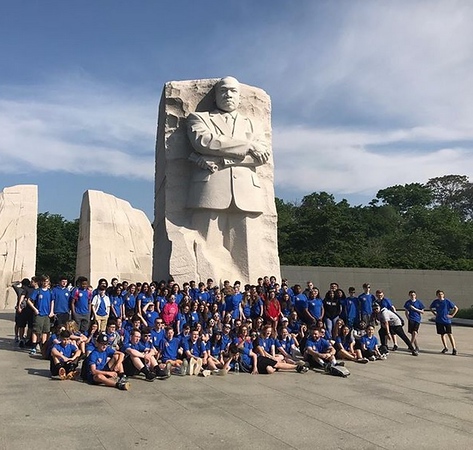 Courtesy photo | Martin Kellogg Middle School students in front of the Martin Luther King National Memorial in Washington, D.C. during their May 2019 trip. Buy this photo

NEWINGTON - Eighth-graders in town are seeing our nationŌĆÖs capitol this spring for the last time, after a decision was made by school administrators to cancel the annual trip after this year.

Martin Kellogg Middle SchoolŌĆÖs 2019 trip to Washington, D.C. took place earlier this month and John Wallace Middle School students and teachers were there this week. The program has been going on since the late 1970s, when it was established to complement the eighth gradeŌĆÖs introduction to U.S. history and government. Course curriculum now covers American history up until the Revolutionary War era, rendering an exploration of modern-day D.C. less relevant, according to school administrators.

The announcement in the schoolsŌĆÖ April 19 newsletter upset many parents and students, who packed Town Hall for a special meeting April 30.

ŌĆ£ItŌĆÖs our responsibility as the board to give people a discussion forum,ŌĆØ Board of Education Chairman Josh Shulman said. ŌĆ£A lot of people were upset by the decision and needed an opportunity to discuss it face to face.ŌĆØ

Newington parent Melissa Fusco started a petition on Change.org that has collected over 1,200 signatures of people who oppose the tripŌĆÖs indefinite cancellation.

ŌĆ£It would be a shame for kids to miss out on this amazing experience,ŌĆØ Fusco said in her post opening the petition.

Her son Dillon is a seventh-grader who spoke up at the meeting, sharing his disappointment.

ŌĆ£I feel like I was that close to being able to go,ŌĆØ the youngster said.

ŌĆ£I know some of you are upset/discouraged about the final outcome not really changing as of yet but try not to be because I am not done fighting this fight and I hope you all arenŌĆÖt either,ŌĆØ it read. ŌĆ£We all need to come together and make this happen for these kids. They all deserve to go on this trip.ŌĆØ

Others added their opinions, some calling upon the superintendentŌĆÖs office and Board of Education to overturn the decision. ThatŌĆÖs not going to happen, according to Shulman.

Shulman remembers visiting D.C. and Williamsburg, Virginia in eighth grade, along with his classmates.

In fact, seventh- and eighth-grade class trips to D.C. are very common in towns across Connecticut, New England and beyond. However, several factors have led some school districts to do away with the excursion in recent years.

Not every family can afford to send their child on the trip, for example. Traveling with minors poses greater liabilities than in decades past. And U.S. history class curriculum no longer aligns with the typical D.C. itinerary.

Newington school officials say field trips are not going away anytime soon. The district has a membership at the Connecticut Science Center and the ChildrenŌĆÖs Museum. There have even been preliminary discussions about Boston and New York City.

Shulman hopes students continue to raise their voices when they feel impassioned to do so.