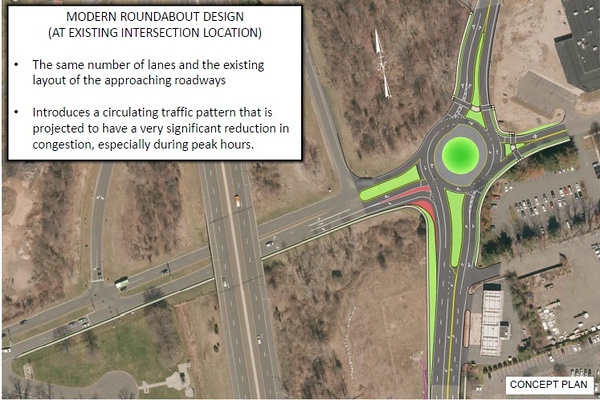 Courtesy of Connecticut Department of Transportation The intersection of Ella Grasso Boulevard, Fenn Road and Holly Drive in Newington, where a roundabout is being proposed to ease traffic congestion and prevent accidents. Buy this photo

Image courtesy of CT DOT | The intersection of Ella Grasso Blvd., Fenn Rd. and Holly Dr. in Newington, where a roundabout is being proposed to ease traffic congestion and prevent crashes. Buy this photo

NEWINGTON - State transportation officials have introduced a plan to fix one of the townâ€™s most dangerous intersections.

Where Fenn Road meets Ella Grasso Boulevard and Holly Drive, the main challenge lies in drivers turning left from Fenn intending to make a quick right onto the ramp for Route 9 northbound.

Crashes occur here around the rush hours, as drivers trying to take a right turn from Fenn onto Ella Grasso and others head straight from or onto Holly Drive, where several factories are located.

A traffic signal in the intersection has failed to prevent traffic jams and accidents, according to the state Department of Transportation. From 2014 to 2016, the corridor saw 47 motor vehicle crashes, including 10 with injuries and, in one case, a fatality.

â€śSevere congestion can lead to crashes and these statistics show us that more significant congestion relief is needed here,â€ť Project Manager Marissa Washburn told the Town Council in July.

She briefed councilors on a solution concept along with transportation engineers Daniel Haptas and Edward Sabourin. Plans call for a roundabout anchored by a center island, with splitter islands along each road to ease traffic flow into the pattern.

Still in its infancy, the proposed project is known as PP-093-017 or â€śRoundabout at the Intersection of Fenn Road & Ella Grasso Boulevard.â€ť

Pedestrian improvements are also proposed, including a sidewalk from the driveway of Iwo Jima Memorial Park down Fenn Road to the Stop & Shop plaza, with crosswalks for Holly Drive and the plaza. CTfastrakâ€™s Cedar Street station and Starbucks are adjacent to the plaza, on the same side of the road.

â€śNo funds have been allocated for this - it would be a future project at this point,â€ť Washburn told the council.

Earlier this week the team said it was finalizing a date with the town for a public information meeting on the proposal. The meeting will probably take place sometime in October.

The group went through several alternatives considered for mending the intersection - including widening Fenn Road to add a double left turn onto Ella Grasso Boulevard. This wouldnâ€™t provide enough relief and could even result in an increase in crashes, the team determined. They also looked at realigning both of the main byways. This proved too costly and did not provide operational improvement needed.

The roundabout was selected as the most effective and feasible option for this corridor.

â€śThe more people know of these roundabouts, the more they use them and the more they like how they control the traffic flow,â€ť Washburn said.

Based on data available after the installation of other modern roundabouts in similar locations across the nation, crashes are expected to decrease by 80% once the improvements are complete.

Realistically, the team is about a year-and-a-half away from the design phase, so the soonest construction would begin is 2024. Unless it faces significant public opposition, the team plans to move ahead with the project after the first meeting.

In that same area next summer, the DOT plans to replace 15 traffic signals along Route 175 that have exceeded their life expectancy.