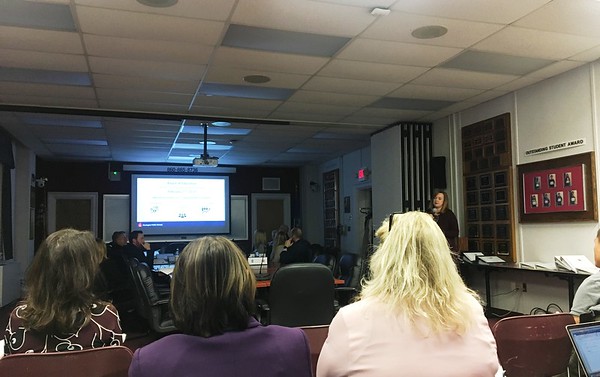 Erica Drzewiecki | Staff Superintendent of Schools Maureen Brummett, right, presents her 2020-21 budget proposal to the Newington Board of Education. Buy this photo

Erica Drzewiecki | Staff School administrators and others watch a presentation of Superintendent Dr. Maureen Brummett's 2020-21 Budget proposal during a meeting of the Board of Education. Buy this photo

Brummett presented her $77.3 million proposal to the Board of Education, whose members will spend the next month or so reviewing it and making revisions before presenting their request to the Town Council in March.

‚ÄúWe‚Äôve built a budget that is not only fiscally responsible, but also moves the district forward,‚Äù Brummett told the Board of Ed and school administrators who attended the meeting.

The most significant new initiative would implement Pre-K programming at each elementary school, requiring the district to hire two new teachers. The BOE now has to decide whether or not it supports this.

Brummett worked in the Plainville public schools from 1997 through 2019 before being hired as superintendent in her hometown of Newington last summer. She was credited with transforming Plainville‚Äôs preschool program to a full-day, full-week model for all 4-year-olds toward the end of her tenure there.

Her spending proposal includes several new hires, including one humanities teacher, fulfilling a state mandate for black and Latino studies at NHS, and two part-time staff members - a speech pathologist and a health specialist.

The above initiatives, including the preschool expansion, represent less than 1 percent of the total increase. Fixed costs that the district has no choice but to fund comprise the majority of new spending.

The largest budget driver is employee salaries, required by union contracts at a 1.52 percent increase. Similarly, employee benefits are set to increase .74 percent and special education costs will rise by .85 percent.

Board member Steven Silvia, known for his conservative fiscal approach, pointed out that state mandates and fixed costs put school officials in a difficult bind each and every year.

‚ÄúYou‚Äôve helped me realize the challenges you have to face,‚Äù he told the new superintendent, thanking her for her hard work, but going on to add that the district must consider the burden of raising taxes and find some other source of revenue to offset costs.

‚ÄúThe only tool we have is to go to the taxpayer and say, can you give me more money?‚Äù he said. ‚ÄúWe need more tools in our tool closet in order to offset their contribution.‚Äù

While school funding represents the majority of Newington‚Äôs annual budget, the BOE‚Äôs yearly increases have historically been less than the town government‚Äôs side, Brummett shared.

‚ÄúWhat is most notable to me is this town‚Äôs five-year average increase was 3.1 percent while the Board of Ed‚Äôs was 1.9 percent,‚Äù she said. ‚ÄúThese are pretty low averages over the past five years. We realize we can‚Äôt have everything we want. There‚Äôs only a certain amount of money the town can afford to give us. However, these are really important considerations for our kids.‚Äù

Berlin‚Äôs superintendent of schools put forward a 6.47 percent increase this year; Cromwell is tackling a 3.29 percent proposal and Southington, 3.12 percent.

BOE budget workshops continue in Newington Feb. 19 and 26. The board must approve its final request by Feb. 26 before Chairman Paul Vessella joins Brummett in a presentation to the council March 10. A public hearing will immediately follow.