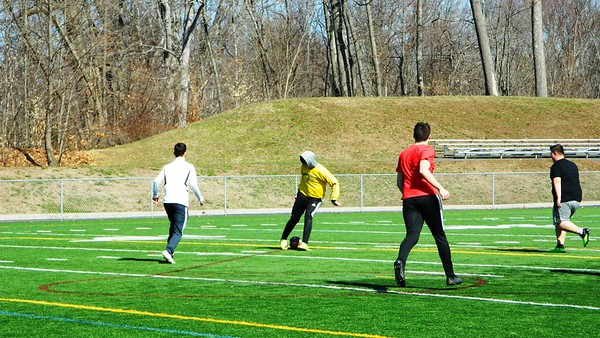 Erica Drzewiecki | Staff Local teens played soccer at Clem Lemire in Newington while off from school last week. The town is now prohibiting games of any kind from taking place in public parks to stop the spread of COVID-19. Buy this photo

Erica Drzewiecki | Staff Local teens played soccer at Clem Lemire in Newington while off from school last week. The town is now prohibiting games of any kind from taking place in public parks to stop the spread of COVID-19. Buy this photo

NEWINGTON – If you have plans for a friendly game of soccer at Clem Lemire Recreation Area tomorrow, consider them canceled. The same goes for a play date on the playground at Churchill Park, or a round of catch on the baseball diamond at Mill Pond.

The Town of Newington has officially restricted use of all equipment in public parks for the foreseeable future, another social-distancing measure to stop the spread of COVID-19.

This new policy covers playgrounds, exercise equipment and all athletic areas, including basketball, soccer, tennis, pickleball, volleyball, bocce, horseshoe courts and fields. Groups of 10 or more are also prohibited from congregating in parks during this time.

Town Council directed Town Manager Keith Chapman to execute the order after this week’s meeting. Chapman reached out to Parks and Recreation Superintendent Bill DeMaio and he took it from there.

For the time being parks staff will be acting as “park rangers” to monitor the north and south sections of Newington and all parks within them. Park participants whom do not abide by the temporary emergency rules will be asked to leave.

“We’re taking a proactive approach,” DeMaio explained. “All the experts and doctors are telling us when you exchange balls and equipment in sporting events there’s a higher risk of getting this virus. I’ve been following what everyone’s been doing across the country and this has become a pretty standard practice over the last three days.”

Recreation is still a possibility in Newington parks, but it’s limited to activities like walking, biking or running on trails while keeping a six-foot distance from other people.

“We’re encouraging people to go out and enjoy nature,” DeMaio said. “Just be smart about it. Use common sense. Enjoy one another’s company but do so at a safe distance.”

“We’re here to take in some tranquility, get in a better head space,” they told him.

He has no doubt Newington, the nation and the world will be better for the struggle.