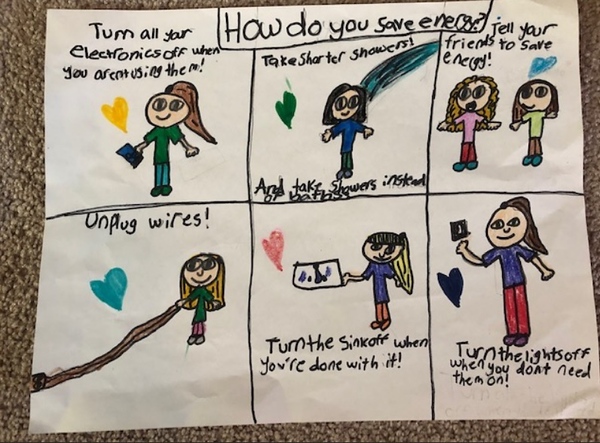 Four students from Newington were recently selected as finalists for their work on energy conservation in a statewide competition run by the utility companies.

More than 300 entries were submitted from youngsters around Connecticut, and Energize Connecticut staff selected three winners from each grade level.

A second-grader from Anna Reynolds Elementary School won second place for her grade.

“Turn off your electronics when you’re not using them,” it read. “Take shorter showers.” “Unplug wires.”

The third place winner among third-graders’ entries was a student of Emmanuel Christian Academy in Newington.

Josephine Virgo was selected for the short narrative she composed, in which the main character saves energy in their home and school by recycling.

“It’s not easy being an energy superhero, but it feels good to make the world a better place,” Virgo said.

Fifth-graders were asked to read one of two books and write a review that incorporated their understanding of how the book promoted conserving natural resources and energy. MKMS fifth-grader Maggie Krusewski won second place for her review of “The Lorax” by Dr. Seuss.

“By saving the environment, you are saving animals, humans, energy, the world and more,” she said.

Seventh-grader Elesa Joseph created a persuasive poem for her project.

“Start using clean renewable resources because it will help you and the world in the long run,” it read.

Joseph was nominated by her science teacher Ashley Klopfer.

Due to the covid-19 pandemic, the Energize Connecticut team modified contest rules so students could submit their projects electronically this year.

More than 300 students entries from 76 schools and 49 Connecticut towns were considered.

Only 35 students were selected as finalists and each received a certificate and a gift card to Amazon.

“Every year I look forward to seeing the entries of talented students across Connecticut,” Conner said. “They have so many wonderful ideas on how we can save energy and make the world a better place. It is my pleasure to congratulate the winners and do a shout-out to their families and teachers.”

The mission behind the eesmarts learning initiative is to create an energy-efficient ethic among the younger generations in Connecticut. The program provides learning materials to guide educators and offers school districts free professional development, in-class lessons and outreach on energy, energy efficiency, renewable energy and electricity. Workshops and curriculum align with Next Generation Science Standards and Common Core Standards for math and language arts.