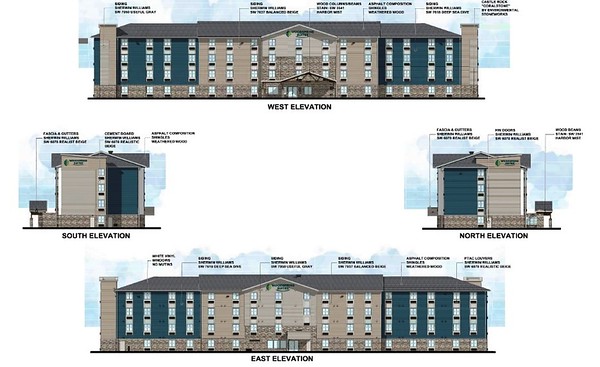 Courtesy image | An architectural rendering of the 122-room extended stay hotel planned to be built at 712 Cedar St., Newington. Buy this photo
Published on Wednesday, 13 January 2021 17:08
Written by Erica Drzewiecki

NEWINGTON – The town is now finalizing a tax agreement with a developer looking to build an $11.1 million hotel at 712 Cedar St.

Town Councilors voted unanimously Tuesday night to offer Gold Coast Premier Properties a 40% tax abatement for 10 years, contingent on the developer’s plan to build a 122-room extended-stay hotel on the site, close to the intersection of Rt. 175 and Fenn Rd.

Representing the developer, Hayes-Kaufman Partnership has been in negotiations with Town Manager Keith Chapman over the last several months for the abatement. Elected officials were informed back in December a deal was in the works at the site, currently owned by Fenn Road Associates.

“The original request was much higher; my counter proposal was much lower and through negotiations we came to a figure of 40%,” Chapman told the council ahead of Tuesday’s vote.

A resolution to approve the tax agreement was met with some push-back from former town councilor Clarke Castelle, who raised questions about offering the developer a break this significant in payable real estate taxes.

Mayor Beth DelBuono addressed his concerns, explaining the abatement had been carefully negotiated by the town manager and was comparable to those presented to developers in other towns across the region.

“Many towns have developed set procedures and levels of abatement for these types of requests, which are very common today,” he said. “Virtually every new developer is seeking this type of arrangement. The town of Newington, wisely, has not set a standard. Each development is considered on its own merits.”

Some towns have offered abatements of 70 percent in order to develop real estate within their perimeters and grow their grand lists. This particular site is in a prime location, Chapman pointed out, so the town was able to negotiate.

“This developer can easily go to another town if we said no to a tax abatement,” he added, calling the investment “a win-win situation for everybody.”

It is important to note the approved agreement will be rendered null and void if the property is not built to the standards set in the contract.

The cumulative growth of real estate over the last four grand lists in the town of Newington is more than negative $6.5 million, Kosofsky reported, adding, “The only reason there has not been a more adverse tax effect on this community is because of our aggressive approach in valuing business personal property.”

Net growth in this area over that same time period was upward of $30 million.

“That is what has been carrying this community, but it cannot continue,” Kosofsky said. “I’m not particularly a huge fan of fixed assessments or tax abatements, but it’s something Newington needs to do better than our competitive towns in order to gain the advantage of drawing businesses here.”

After its upcoming review by the Town’s Plan & Zoning Commission, the project is slated to employ up to 250 people over a 13-month construction period. Once completed, the hotel will employ about 15 people on a permanent basis, according to the developer’s estimates.

With the 40% abatement councilors approved Tuesday, the estimated $11.1 million hotel would net the town $1.8 million in taxes over 10 years at the current mill rate of 39.