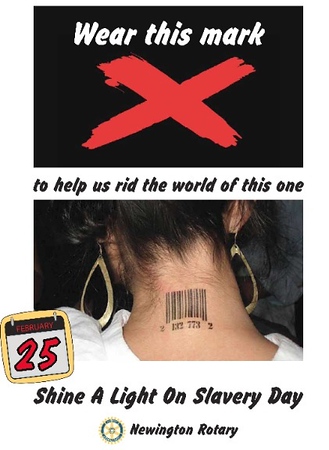 Contributed image | The #ENDITMOVEMENT as promoted by Newington Rotary Club ahead of Red X Day this Thursday. Buy this photo

NEWINGTON – If you happen to be out and about this Thursday, look for a quick flicker of red on the hand of someone hailing a taxi, opening a door or waving hello. Even on social media, there’s a chance you’ll scroll through at least one photo of someone with Red X marks painted above their wrists.

Feb. 25 is International Red X Day, in recognition of the End It Movement to raise awareness about human trafficking. This is a $150 billion industry that currently enslaves an estimated 45 million men, women and children, according to the International Labor Organization.

For the second year in a row Newington Rotary Club is championing the cause in the local region, asking residents, businesses and organizations to join in the movement.

“Just draw a red X on your hand, then post a photo or video on social media using #enditmovement and spread the word,” Rotary past president Dave Tedeschi said Tuesday. “The simple act of drawing a red X on your hand will provoke questions and encourage discussions about exploitation. Those who join the movement help continue and expand the conversation by educating others, bringing awareness and encouraging people to take actionable steps.”

GoldBurgers in Newington is one of those getting involved.

“Our employees will be participating in Red X Day on Thursday and sharing to social media,” Owner Matt Crowley told the Herald. “We will also encourage our customers to join us in wearing the red X symbol, posting to the internet and helping the Newington Rotary spread awareness of all types of human trafficking.”

Tedeschi first got his club involved a few years back, after learning that sex trafficking is happening not just in major cities, but in motels on the Berlin Turnpike and even rural communities.

Connecticut’s Department of Children and Families (DCF) responded to 210 referrals for the sex-trafficking of minors in 2019. Among them, 20 cases involved boys and 133 cases involved minors living at home with parents who were unaware of the exploitation.

Rotary’s Stop the Traffic initiative works to foster education to prevent this crime and help victims.

“We’re 100 percent supportive,” DeMaio said. “It’s such a serious situation and frankly I’m appalled it even goes on.”

His department is always happy to join forces with Newington Rotarians, DeMaio added, and they will help with marketing and promotion this Thursday.

Last year’s school closings during the pandemic made it easier for children to fall prey to traffickers. The Federal Bureau of Investigation and Polaris both reported an increase in cases and warned parents to be mindful of online predators.

“Slavery is a fundamental violation of human rights, and somehow we have to end it,” Tedeschi said. “Last year was the first year we participated in this global initiative and this year we are getting even more support.”

As Governor of Rotary District 7890, he’s recruited members from 60-plus clubs in Conn. and western Mass.

“When we join together to fight trafficking, survivors win,” Tedeschi said. “We hope to be part of the generation that ends human trafficking.”