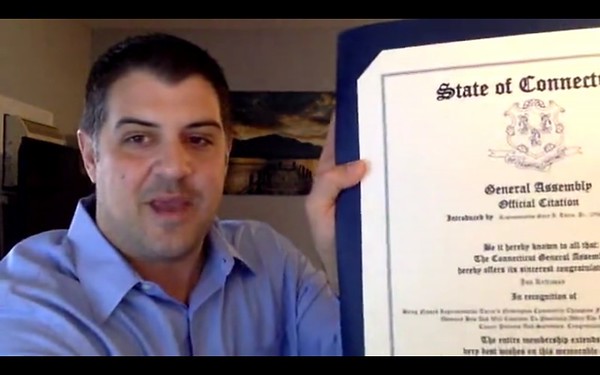 â€śThere are a lot of different awards the Board of Education, Town Council and others give out to individuals in Newington for all different reasons,â€ť Turco said. â€śBeing a State Rep. one of the things Iâ€™m always doing is advocating for positive change and there are Newington residents out there who are also fighting for positive change. Itâ€™s great when our causes alignâ€¦the March Newington Community Champion Award goes to Jan Kritzman for her tireless work as an advocate for breast cancer insurance.â€ť

He and Kritzman worked together to pass legislation in Jan. 2019 that eliminated out-of-pocket costs for breast cancer screenings, ultrasounds and MRIs.

â€śWe are currently working on another bill which continues efforts to make the early detection of breast cancer more affordable for women with dense breast tissue,â€ť Turco said.

The state representative received Kritzmanâ€™s nomination from several others in Newington who knew of her tireless efforts, which began well before he was elected to the Connecticut General Assembly.

â€śJan has been fighting for years for legislation mandating that insurance companies cover the cost of life saving mammograms, ultrasounds and MRI screenings for those diagnosed with dense breast tissue,â€ť read one of the nominating emails. â€śI believe Jan was instrumental in passing legislation preventing insurers from charging out-of-pocket expenses for these screening services and is now fighting for coverage of diagnostic screening once something suspicious is found and patients need follow up imaging. This has been a cause dear to her heart for about 20 years due to her personal story and her desire to help others. Janâ€™s determination on this important issue has been unwaning. No doubt Jan Kritzman is a community champion and deserves this recognition!â€ť

A second nomination read, â€śJan Kritzman is an extraordinary person who works tirelessly with a passion, drive and deep caring advocating for change far beyond our communityâ€¦HB 5687 will profoundly affect the lives of many, promoting health and well-being.â€ť

Turco is now accepting nominations for the April Community Champion. Criteria includes Newington residency and commitment to inciting positive change. Nominations can be sent to gary.turco@cga.ct.gov and should contain the nomineeâ€™s name and contact information, along with the reason they are being nominated.