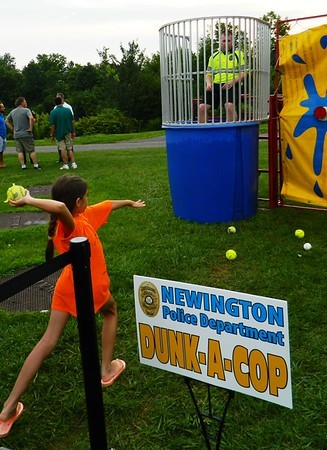 Erica Drzewiecki | Staff The dunk tank in action during a previous yearâ€™s National Night Out. Buy this photo
Published on Monday, 2 August 2021 14:42
Written by JUSTIN MUSZYNSKI

NEWINGTON -- The police departmentâ€™s National Night Out has been canceled for the second year in a row over covid-19 concerns.

Police on Monday announced that the event, scheduled for Tuesday from 5 to 8 p.m., in the parking lot of the police department on Cedar Street, would be called off because of a recent increase in Newingtonâ€™s coronavirus positivity rate.

This would have been the fourth year that Newington police joined a national campaign to encourage community-building between law enforcement and the public. The campaign began in the 1980s.

The event would have been free and open to the community, with food, ice cream and games, including the dunk-a-cop tank, rolling video games truck and childrenâ€™s inflatable amusements.

Numbers released by state officials on Friday indicated Connecticut saw 491 new cases of covid-19, compared to the previous day, and that hospitalizations from one day to the next increased by four, putting the stateâ€™s total covid-19 hospitalization count at 116. The stateâ€™s positivity rate sits at 2.72%, the data released Friday said.