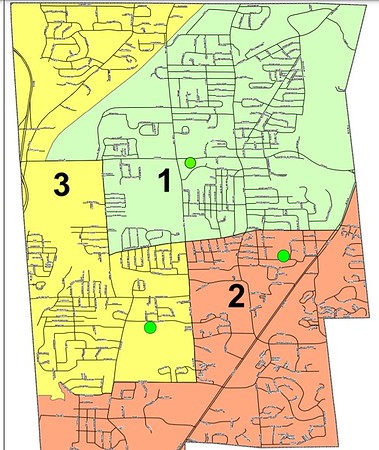 Courtesy image | The voting redistricting plan proposed in Newington, which would reduce the number of districts from eight to three. Buy this photo

NEWINGTON – A small crowd is expected to gather outside Town Hall Tuesday morning to discuss protecting the rights of voters.

State Sen. Matt Lesser, D-Newington, and State Rep. Gary Turco, D-Newington, will join voter rights’ advocates and concerned residents outside the front entrance of Newington Town Hall, 200 Garfield St. for a 10 a.m. press conference on a proposal by Newington’s Registrars of Voters to reduce the number of voting districts in town from eight to three.

“I’m really focused on what’s going on in the community I represent, but protecting voting rights and the sanctity of our democracy has been a conversation nationwide for the last couple of years,” Turco told the Herald Monday morning.

The town’s proposal came after the 2020 Census was completed and State Assembly districts were redrawn, so the 20th and 27th are the only to fall within Newington’s borders. Registrars Theresa Avey and Marie Fox said staffing the polls has been increasingly difficult and this would reduce the number of workers needed and at the same time, save the town a little money. The opportunity is there if officials choose to move forward with it they said during their presentation to the Council Jan. 11.

Those opposed to the plan say it could cause “major disruption” and “mass chaos” citing concerns over limited access to new voting locations by non-drivers, seniors and the disabled, and increased traffic and long wait times at the polls.

“Regardless of the intention, the consequence would be making it more difficult for people in Newington to vote,” Turco said.

Newington has about 21,500 registered voters living in town, with an average of 2,700 per district, spread out among the current eight voting districts. The three new districts would have an average of 7,100 voters each.

According to the Brennan Center for Justice, which tracks legislation affecting voters, 19 states enacted 34 laws making voting more difficult in 2020. Some of the sanctions included limiting access and submission of mail-in ballots and more stringent guidelines for voters in terms of identification and their right to vote.

“I think it’s important that we look at how these decisions get made to see if there needs to be a larger statewide conversation in the voters’ best interest to ensure voting is easy and accessible,” Turco said.