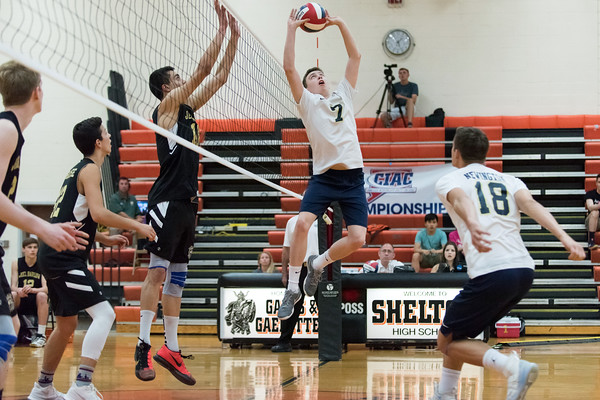 NEWINGTON - As with any program, players have come and gone for the Newington boys volleyball team. But despite a run of sustained success that saw the Indians capture their fifth Class M title in seven seasons, that doesn’t mean certain players aren’t missed.

That is exactly the case for senior Daniel Cloutier after being a crucial part to the title run this season.

“It feels great,” Cloutier said after Thursday’s championship match. “We worked hard all season and this a great way to go out.”

Cloutier stepped into a key role in his first full varsity season, one that saw him turn into one of the team’s most important players both on and off the court.

“A year ago he was just a serving sub, he would come in and serve in the back,” Newington head coach Curt Burns said. “[In the title game] he’s running the offense against a great [Joel] Barlow team and leading our team to the championship. So that’s a big improvement he’s made in just one year.”

Running the offense was what Cloutier did all season long and his 54 assists, nine digs and three blocks in the final match showcased a player who had made great strides since completing his junior season.

“During the offseason he improved his game and in the preseason we had a competition for the starting center and he won out,” Burns said. “Once he had the job he kept adding to it and adding to it. He’s a very good athlete, very cool and calm headed. He doesn’t get flustered out there and he knows to calm both the team down and he makes smart selections on his sets. He’s really strong at managing the game out there.”

Cloutier was one of three seniors on the roster and played the biggest role of the group as the leader of the offense.

“He’s a great floor leader,” Indians outside hitter Leonel Caceres said. “He’s our general on the floor. He tells us where to go, we go. He tells us what to do, we do it. The loss of him is going to impact our team next year is gonna be a challenge. But somebody’s got to step up. That’s going to happen but we’re going to miss Daniel.”

Newington was a dangerous team at the net with Louis Egbuna, Teddy Fravel and Mason Romano all having big games in the championship. Cloutier was the man setting the three up all season.

“He’s been that guy for us this year, he’s been killing it all year,” Romano said. “He just controls the game. If he’s playing good then we’re playing great. Losing him is going to be huge. But we’ll have people ready to step up and take that responsibility.”

For the three up front, the loss of Cloutier will be a big one but his presence in the middle won’t be forgotten as a state-championship floor leader.