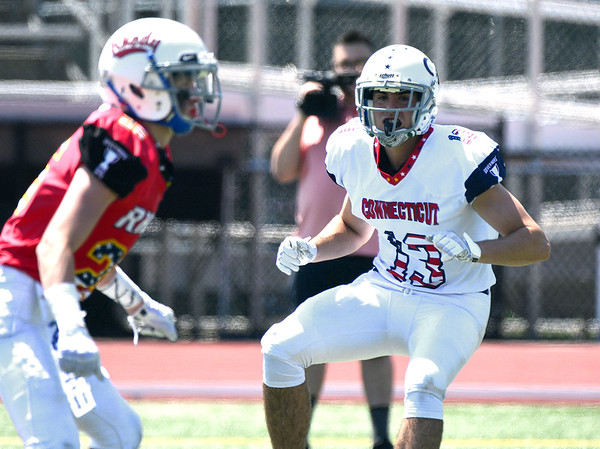 NEW BRITAIN - After a five-year layoff the Governorâ€™s Cup returned Saturday afternoon as select football players from Connecticut and Rhode Island lined up at Veteranâ€™s Stadium in New Britain.

With the heat bearing down on the field, it may have impacted the players but it certainly didnâ€™t show on the field for the Connecticut group as it routed Rhode Island 28-7, dominating both sides of the football.

Southingtonâ€™s Tim Oâ€™Shea (Wagner College) finished the game with three catches for 46 yards and was on the receiving end of one of the three touchdown passes from the Offensive MVP of the game, Central Connecticut State University bound quarterback Kyle Zajack, who played high school football at Capital Prep.

Oâ€™Shea believes the game being played in the summer months is beneficial for the collegiate bound players.

â€śThat was actually one of the things my parents were saying before,â€ť Oâ€™Shea said. â€śThey thought it was a really good idea for me to do this because it helps with conditioning. And it really does. Itâ€™s two weeks of hard practices, three hours every day. So it does really get your conditioning really good and prepared for the competition at the next level.â€ť

In the first quarter there was some rust on both sides, as the two teams were playing a game together for the first time and the opponents were completely new faces from a different state.

He threw a dart to Zach Pezza for a 49-yard touchdown catch to put Rhode Island up 7-0 in the first quarter.

There wasnâ€™t much offensive action outside of the Pezza touchdown in the first quarter.

With the first quarter over with and the jitters out of the way, Connecticut got going on both offense and defense.

Zajack found Simsburyâ€™s Ralph Gilliard streaking down the field for a big 64-yard touchdown pass on the first possession of the second quarter for Connecticut.

Zajackâ€™s pocket presence stood out throughout the game and he was clearly the best quarterback on either side. His backup Shea McManaway was forced from the game in the first half after taking a vicious hit. Zajack played the entire second half.

â€śHis performance speaks for itself with what he does,â€ť Connecticut assistant coach and Plainville head coach Tim Shea said. â€śHe made the right reads, threw the ball well and took charge of the offense. Itâ€™s exciting for me as a head coach [at Plainville] to be able to see and coach some of these kids that Iâ€™ve read about, scouted or watched film on over the years and getting to be a part of this is a pretty cool thing.â€ť

Bulkeleyâ€™s Deyjion Washington intercepted Liam McManus for a pick six to give Connecticut the 14-7 lead going into the half.

With the heat bearing down on the field Rhode Island and Connecticut were playing a defensive battle to begin the second half with three straight drives resulting in punts.

The third quarter had no points but Connecticut wasnâ€™t done offensively.

Connecticut drove down the field on its second possession of the half with some big plays from Killingly running back Spencer Lockwood, who flashed his ability to catch the ball out of the backfield on the drive with a 24-yard screen pass from Zajack and had a pair of first downs.

Lockwood moving the chains resulted in Zajackâ€™s second touchdown pass, a 20-yard strike to St. Josephâ€™s Jared Mallozzi with 10:24 left in the fourth quarter to make the score 21-7.

Oâ€™Sheaâ€™s fourth quarter touchdown catch was setup by Mike Casinelliâ€™s fumble recovery. Casinelli was named the Defensive MVP of the game for Connecticut.