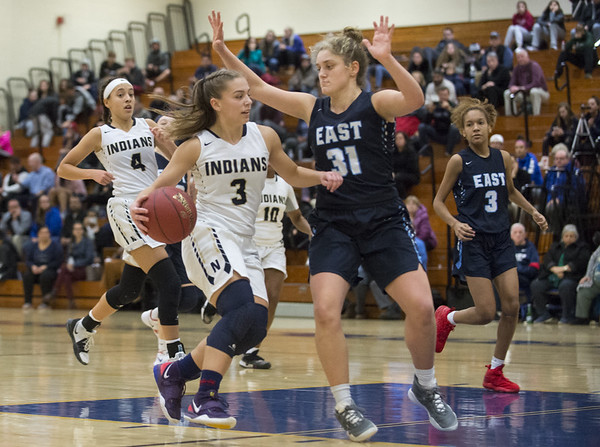 01/16/20 Wesley Bunnell | Staff Newington girls basketball vs East Catholic in a game on Thursday Jan 16, 2019. Newington's Ashanti Frazier would break the 1,000 points scored milestone during the first half. Karissa Zocco (3) drives to the basket. Buy this photo
Published on Friday, 17 January 2020 13:37
Written by

HARTFORD - The Democratic speaker of the Connecticut House says state lawmakers should consider whether to ban Native American athletic nicknames and symbols at public high schools after one school restored its Redmen mascot just months after dropping it.

“I’d like to see a bill introduced to have a public hearing and have the discussion," Joe Aresimowicz told the Hartford Courant.

The school board in Killingly voted in June to drop the high school's Redmen nickname, and then replaced it with Red Hawks in October. The board, with an infusion of new Republican members, restored Redmen last month.

“They made a mockery of the process,” said Aresimowicz, who is also head football coach at Berlin High. "They take the proactive step to change the name, and then in typical reactionary political behavior, they reverted back.”

Several states, including Maine, have either banned or restricted the use of Native American mascots in public schools.

There are currently 19 public high schools in Connecticut that use either Native American-themed nicknames or imagery, including the Newington High School Indians.

Opponents of such names say they are racist and perpetuate stereotypes. The defenders of Native mascots and symbols say they are signs of respect.