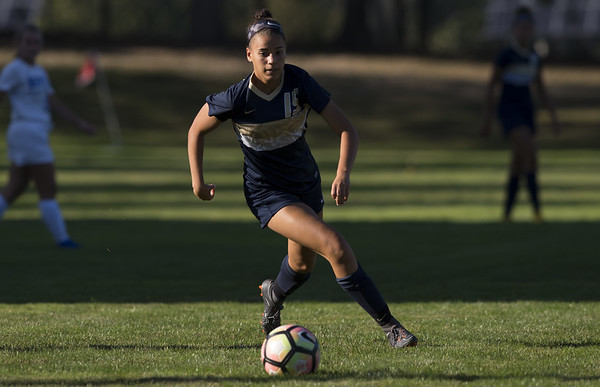 NEWINGTON - When senior Olivia Mullings suffered an MCL injury during the Newington girls soccer team’s 2-0 loss to rival Wethersfield on Oct. 3, the All-State and All-New England standout had to decide how much of her future she was willing to risk.

Mullings had already committed to play Division-I soccer at the University of Hartford in 2021, but after nearly losing her senior season entirely due to covid-19, was hardly ready to miss time during a shortened campaign that consisted of just 12 regular season and two postseason games.

“When I hurt it, I didn’t realize it until the next day and when I started walking and everything I thought ‘OK, I need to deal with this,’” Mullings said. “I went to the trainer and he wrapped it and said compression was the only thing they could do about it right now, and if it got worse, we would have to deal with it. But it felt OK after I wrapped it, and I wasn’t going to let that stop me and make me sit out and miss the rest of the season.”

It was a heavy decision for Mullings to weigh. She could either play through pain and take in her final weeks as a high school athlete or take time to heal and make sure the next step of her playing career wasn’t endangered in any way. But it didn’t take Mullings long to make her decision, quickly choosing to make sure she didn’t miss her final chance to play for Newington, which was far from a certainty even before she suffered her injury.

“I was scared initially when it happened because I didn’t want to miss my last year,” Mullings said. “I wanted to be able to finish the season and accomplish the goals I set for myself. But I also had to think about my next year and college, and would it be worth it to push myself through my final high school year and risk not being able to start my first college season? So I’m just being really diligent in what I do and make sure I’m not making stupid tackles or go for 50/50s where I could make it worse.”

The risk of further injury has forced Mullings to change her style of play, one that helped her become one of the top players in the state, and all of New England. While her soccer instinct may urge her to slide in and disrupt a pass or make a tackle, Mullings has had to betray certain reflexes to ensure she won’t have to miss any game this season or beyond.

“I’m usually very aggressive and on the ball and moving quick, but my lateral movement isn’t there and some of my shots aren’t there,” Mullings said. “So I have to prioritize. I know I want to play in college so I’m just trying to take it easy.”

Mullings, who also goes to physical therapy for a shoulder injury, has become familiar with playing through pain. Now, she’s had to become familiar with playing through risk, and is reminded of both each time she makes a pass with the inside part of her foot or winds up for a long-distance shot. Both acts create pain in the MCL area, and sometimes, the discomfort is too much to deal with. Earlier this season against Berlin, Newington was in a battle with the Redcoats in the pouring rain, causing a slicker surface that made lateral movements even more difficult, and in Mullings’ case, more painful. She had to sit for extended periods of time during that 1-0 loss and was moving noticeably gingerly when she was on the pitch. Mullings is currently far from 100 percent in terms of health, but is putting in 100 percent of the effort that she’s currently capable of producing, playing with the knowledge that this is her last hurrah with Newington, but not her last dance on a soccer field.

That balance has been what Mullings has tip-toed since the second game of the season.

“It was a pretty easy choice that I didn’t want to miss any games,” Mullings said. “My Hartford coach told me to not do anything dumb and to be smart. He said he knew I’m not the type of player that would sit out, but he said to be smart and to not sacrifice my first year of college for my last high school season.”

Ryan Chichester can be reached at rchichester@newbritainherald.com