Newington boys basketball rolls to easy win over Bulkeley to get back over .500 mark 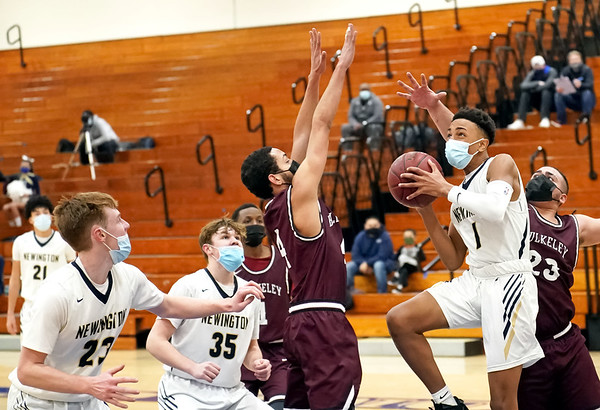 NEWINGTON - The Newington boys basketball team brought its record back above .500 with an assertive home win over Bulkeley on Monday night.

The Bulldogs never scored more than 10 points in a quarter as Newington ran a full-court press that generated several turnovers on its way to a 60-29 victory.

Newington is now 3-2 on the season courtesy of 11-point performances from sophomore Alex Cucuta and junior Trey Guest who were the only players to reach double-digit scoring for the game.

Newington started building its lead in the first quarter when Isaiah Grange knocked down a three-pointer and a steal of the ensuing in-bounds pass created a quick layup. This sequence gave Newington an eight-point lead that only grew for the rest of the game by stopping Bulkeley possessions before they started with a full-court press.

“I think our first half was choppy,” head coach Ed Quick said. “We were really playing hard on defense, we’re trying to guard, put pressure on the ball whether it’s full court or half court. We just haven’t found that niche yet. We had a little stretch in the third and fourth quarter where we shared the ball nicely and got layups.”

Leading by 12 at halftime, Newington secured its victory in the third quarter by taking over offensively and defensively.

The Bulldogs failed to make the necessary adjustments to move the ball upcourt better and gave Newington more offensive possessions on turnovers. Newington also made a concerted effort to get shot opportunities near the basket, which generated six trips to the free throw line and put the team up by 30 with one quarter remaining.

“We stopped reaching, we played good fundamental defense, we ran our lanes in transition and we got some good, easy shots,” Quick said. “The game is still about getting good shots.”

Newington outscored Bulkeley 22-4 in the third quarter led by six points from sophomore Gavin Gray off the bench who created quality scoring chances for himself in his limited minutes. Guest and Cucuta both followed by adding five points in the frame, including one of Cucuta’s two shots from behind the arc.

“I thought we shared the ball well in the third quarter,” Quick said.

The Bulldogs were unable to score for the majority of the quarter with all four of their points coming in the final three minutes of the period. While Newington’s passing resulted in easier shots, Bulkeley could not take care of the ball enough to find the spaces in the Newington defense.

The fourth quarter was as evenly matched as the teams looked throughout the game and no player made more than one field goal in the eight minute span. Cucuta made his first triple then and was the only person to score more than two points in the quarter.

Newington returns to the court Thursday for a road contest against Rocky Hill at 6:30 p.m., which will mark the midway point of the regular season.

Matt Hornick can be reached at mhornick@bristolpress.com