Jacob Baclawski (8) goes up and over the net for Newington. | Dan Heary Buy this photo 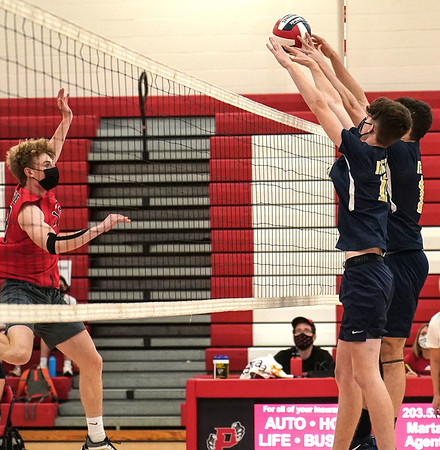 SOUTHBURY – Second-seeded Newington boys volleyball showed why it's a perennial state power in its 3-0 win over No. 3 Chesire during the semifinal round of the Class M state tournament at Pomperaug High School on Monday.

Winners of five of the last six Class M titles, the Nor'easters looked comfortable in their dominant win over the Rams, winning 25-22, 25-21 and 26-24.

“This was actually a rematch of the 2019 [state] final,” Newington coach Curt Burns said. “They're a great program and we knew they were going to be good. They proved that in that third set when they pushed us.”

Cheshire fought back to tie the score in the third game multiple times, forcing Burns to use a couple of timeouts late. However, a serving error for the Rams gave the Nor'easters possession up 25-24, before Cheshire returned a ball out of bounds, giving Newington the victory.

“Today we had good energy,” Nor'easters senior Jacob Baclawski said. “I feel like we weren't at 100 percent, because we were a little bit sloppy. But overall, we help each other up so it's easier for us to keep going and we have a really strong offense.”

Save for a short run from the Rams late in the match, Newington was in the driver’s seat from the start as it looked in control of the pace and momentum all throughout.

“Once you get a team that forces that fourth set, then you got to go out and anything can happen, so you want to close them out,” Burns said.

Baclawski showcased his power, producing a team-high 18 kills in the win.

Sean Stegmaier also finished with double-digit totals in kills with 10 for the Nor'easters.

Eni Lici led in assists with 40 while Vietahn Dinh concluded with 10 digs.

While it didn't show up on the stat-sheet, Joshua Akosa aided Newington's strong start with a solid afternoon from the service line, particular early in sets.

“We started him in the number one spot serving because his percentage is 97-98 percent,” Burns said. “It's not an overwhelming serve, but it floats and he gets it in at such a high percentage, which is so important.”

The impressive win gives the Nor'easters plenty of momentum into the championship match, which the program is quite familiar with, even if most of the roster doesn't have the experience.

“I'm feeling really good because I started my sophomore year and we were in the state finals so I have already a bunch of experience,” Baclawski said. “I just got to help my teammates get used to it.”

Baclawski is the only starter from the 2019 team.

Newington (19-2) will play the winner of No. 1 Joel Barlow and No.4 South Windsor on Thursday at the Sports and Medical Sciences Academy at 5 p.m.