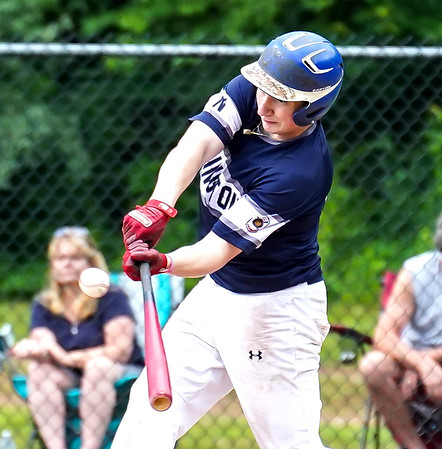 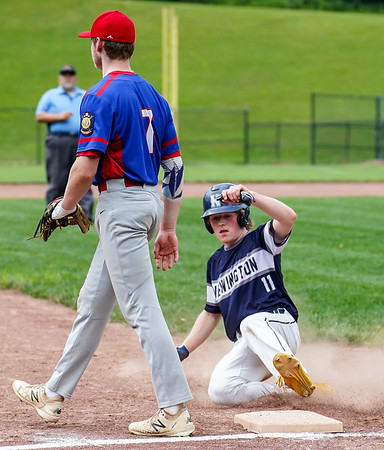 Ryan Saindon (11) slides into third base during the Newington Legion baseball game against Berlin. | Dan Heary Buy this photo

BERLIN â€“ A four-run third inning was the difference in Newington Legion baseballâ€™s 5-3 win over Berlin on Wednesday at Zipadelli Field.

Trailing 2-0, Newington knocked in four runs on three hits and a sacrifice fly to go ahead 4-2, highlighted by a two-RBI single from Nicholas Cox.

â€śNic Cox, that was a big base hit there,â€ť Newington coach Jack Hurley said. â€śThat was a big inning, to turn it around.â€ť

Austyn Howe secured the first run with a long fly ball to the outfield that scored Sam Dionne, who led the inning off with a single, on a sac fly. A hard hit ball from Cox made it 3-2 Newington before a double from Domenick Bukowski pushed it to 4-2.

â€śWe gave them a couple runs in the first inning,â€ť Hurley said. â€śThe big inning was the third inning because they had the momentum going, 2-0, and we really hadnâ€™t hit the ball too hard [up until then].â€ť

Berlin scored twice in the first on RBI hits from Kyle Hyde and Nick Melville.

Howe pitched a complete game for Newington and scattered five hits for three runs, while striking out two and walking one batter.

â€śTheyâ€™re a lot better team than they show,â€ť Hurley said. â€śJust not getting enough timely hitting. Itâ€™s always the key errors, as soon as it leads to the crooked numbers thatâ€™s the whole thing.â€ť

Berlin finished with three errors in the contest, including two in the first three innings.

The win bumps Newington up to 4-5, while Berlin remains winless at 0-9.

Newington will visit Bristol on Thursday at Muzzy Field at 7 p.m. and Berlin will host winless Simsbury on Friday at 6:30 p.m.