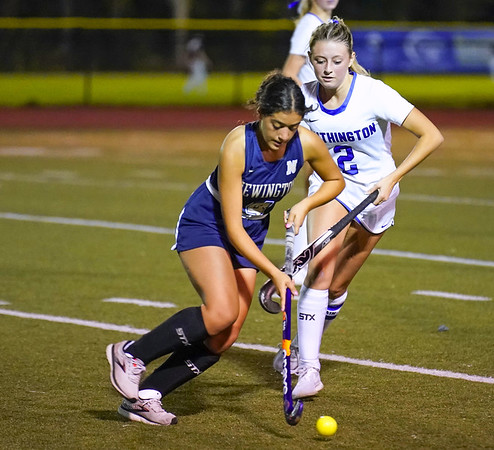 SOUTHINGTON – Makayla Winegar and Melaina Coleman scored for Southington field hockey in its 2-1 win over Newington on Tuesday at Fontana Field.

The Blue Knights netted goals in the second and third quarters, while the Nor'easters cut the deficit to one with a strike late in the third, but the hosts held on for the hard-fought victory.

“We came out a little slow in the beginning, but we picked it up,” Southington coach Erin Luddy said. “We're doing much better using the sides of the field, bringing the ball down the side and taking advantage of all of the time we had in the circle.”

After a scoreless first quarter, Winegar got the Blue Knights on the board in the second frame with a rebound goal at 13:57. The score held at 1-0 at the halftime break.

In the third quarter, Coleman doubled Southington's lead to 2-0 with a sweeping strike in front of Newington's net at 11:42 of the third.

The Nor'easters put the pressure on in the second half and made it a 2-1 game with a goal at 5:39 of the third, but the Blue Knights defense didn't let up anything else en route to its fifth victory of the season.

“Defensively, they're not used to having an offensive player so close [to the net], but they adjusted well in the second half and were able to hold them off,” Luddy said.

Winegar and Coleman are two of the Blue Knights' ususal suspects on offense and Tuesday was no different. The junior and senior helped Southington snap a two-game losing streak.

“They're our two wings, our outside forwards, so having them score is exactly what we want,” Luddy said.

Southington had failed to score any goals during its previous skid but broke through against Newington.

“We've been playing a lot of tough teams,” Luddy said. “Keeping our motivation, keeping our spirits up when we can't score, but having the two today was a big thing.”