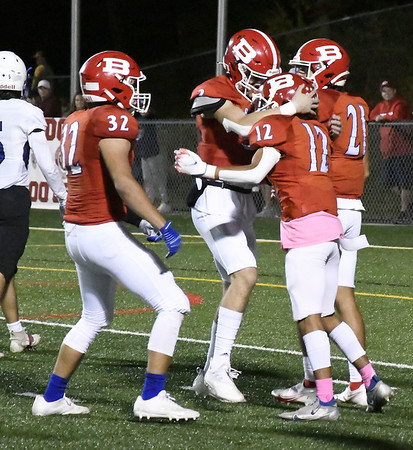 All of a sudden, the high school football postseason is right around the corner and local teams are vying for spots among various Class divisions.

Saturday, Plainville lost its second game of the season after RHAM stormed back to take the win while Newington used similar tactics to take down Berlin on Friday.

With victories meaning a little more at this point in the season, every team is striving to finish strong and secure a playoff slot.

“We'll bounce back, we will bounce back,” Blue Devils coach Tim Shea said. “We have a lot of football ahead of us. I know what these kids goals are and it's still there. The scores this weekend have been wild so any given day it's going to happen this year. Where we want to go, we can still get there, the road is just a little harder now.”

As of now, Plainville occupies the sixth-seed in the Class M rankings. With games against E.O. Smith (one win), Bristol Central (six wins), and Farmington (winless) on the docket, the Blue Devils are best suited to stay in the top eight should they grab at least two more wins.

While Newington boasts the same record as Plainville at 5-2, the Nor'easters are ranked lower in Class L because their two losses were against teams with fewer wins. Therefore, it's victory against the Redcoats was important in more ways than one.

“It's nice to get back on the right side of things,” Newington coach Jason Pace said. “I think that was important for the team to build confidence going forward. But, it doesn't get any easier. We have three tough opponents remaining and each week we're going to prepare like we do every week, the most important game of the season.”

The Nor'easters last three opponents have a combined 15 wins, starting with Platt (4-3) next week, before heading to Windsor (6-1) and then welcome Wethersfield (5-2) in the regular-season finale.

Given Newington's currently at No. 20 in the Class L rankings, it likely needs to win the rest of its games to confidently jump into the top eight.

Lastly, Berlin's postseason chances seemed to slip away after it's defeat to the Nor'easters as the Redcoats are 3-4.

Should something crazy happen, Berlin might slip in as the eighth-seed in Class M if they win the rest of its games, but it looks like the Redcoats will miss the playoffs for the first time since 2015.

“You got to hang in there,” Berlin coach Joe Aresomowicz said. “It wasn't a lack of heart, the kids played hard and did everything they could, it was a lack of execution. We didn't execute at times when it mattered and we had to make some really tough decisions. [Newington] played really well, hats off, they won the game.”

The Redcoats will look to put an end to its three-game losing streak when it hosts Windsor on Friday.