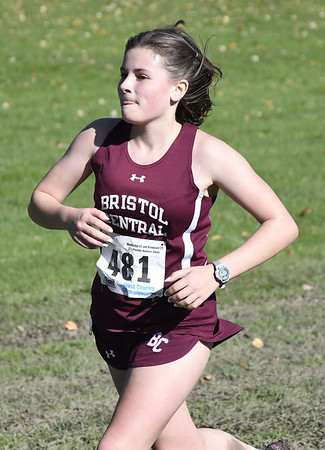 For the Bristol Central boys, their day saw them score 309 points as a team for 11th in the field. Newington was 16th overall with 425 points.

The team winner was Xavier, who packed the top-20 with scoring runners for a low of 54 points.

In a course with muddy conditions due to rain over the weekend, Bristol Central didnŌĆÖt focus too much on how the course ahead of them was presented as much as they were looking to take whatever negatives came and turning the moment into a positive reaction.

ŌĆ£When youŌĆÖre running in a pack, itŌĆÖs hard to see [the dry spots ahead of you],ŌĆØ said Bristol Central head coach Tamara Stafford-Kirk. ŌĆ£ŌĆ” I just told them to stay focused. Our biggest thing is having a positive reaction when something negative happens. ŌĆ” ThatŌĆÖs been more of our focus with them, reacting to someone passing or if you stumble, youŌĆÖve got to react quickly with a positive reaction to get back into the race. That was more of our focus.ŌĆØ

Frankie Porrini of Bristol Central was the leader for the Rams, finishing 11th in the field. Chasing him was Christopher Roy, who finished 55th at a time of 18:48.

ŌĆ£Frankie, making the top-12 for all-state and getting a place in the Open as a junior is good,ŌĆØ said Stafford-Kirk. ŌĆ£I think he wanted to finish a little bit higher. His training has really been on point, ŌĆ” he ran really well (Monday) and in tough conditions, he ran well. I was pretty happy with his race.ŌĆØ

Leading the Newington boys was Michael Bohlke, who raced near the front of the pack all day. His fourth-place finish earns him a guaranteed spot in the State Open later this week, as well as all-state. He ran a time of 16:20.

ŌĆ£Today were were all about make sure he got to the Open,ŌĆØ said Newington coach Josh Brown. ŌĆ£HeŌĆÖs definitely capable of hanging with [the other top runners]. Today, the course conditions werenŌĆÖt great, so it was just go out and make sure we can solidify a spot in the top-12 and make sure we can move on to Friday.ŌĆØ

Collin Karanian was the next to cross for Newington, finishing 70th at 19:04. Further behind him, the rest of the Nor'easters were pack running.

With a handful of runners having their season end, the lone senior in Bohlke moves on. Brown said itŌĆÖll be good to have them back next year as they grew through a rebuilding season this fall.

ŌĆ£They ran a really good season, a really big rebuilding year,ŌĆØ said Brown. ŌĆ£We lost a lot of guys over the last few years. It was a lot of fun, ŌĆ” itŌĆÖs was just nice to having some boys that know within us and each other weŌĆÖve got a few more years with them.ŌĆØ

The individual champion in Class L for the boys was Gavin Sherry of Conard, running a time of 15:25.

NEWINGTON, BRISTOL EASTERN AND CENTRAL BATTLE IT OUT

The Bristol Central and Eastern girls did not field a scoring team.

Like her brother, Katie Bohlke ran a fast enough time to earn both all-state and a guaranteed spot in the State Open on Friday. Katie ran a time of 19:57, finishing sixth in the field.

Alexandrea Daha was the next across for Newington in 44th, running a time of 22:41.

Carissa Toth and Elizabeth Doll finished the race for Newington in 103rd and 111th, respectively. Toth ran a time of 26:06 and Doll crossed at 26:53.

A young team, all of which are sophomores or younger this season, Stafford-Kirk pointed to the season showing tremendous growth while giving high credit to her freshman No. 1 in progressing this season.

ŌĆ£Maura, she stepped in for us as a freshman. Our whole team is young, we donŌĆÖt have a junior or senior on the girls team, so this has definitely been a growing year for the girls,ŌĆØ said Stafford-Kirk. ŌĆ£ŌĆ” ItŌĆÖs been a fun year with the girls sort of teaching them the ropes and enstiling them the things they need to be a stronger team as they become juniors and seniors. Maura really stepped it up from the get-go for us, we needed that.ŌĆØ