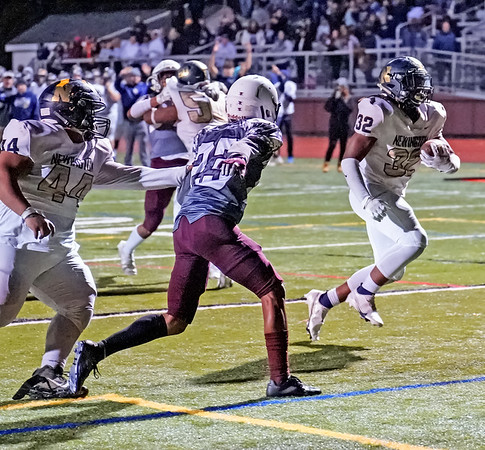 Shakir Smith (32) runs in the ball for a touchdown earlier this season for Newington. | Dan Heary Buy this photo
Published on Tuesday, 23 November 2021 19:45
Written by RYAN AMES

NEWINGTON - It's been a long wait for Newington football as it hosts Wethersfield on Wednesday for the first time since 2019.

The Eagles shut out the Nor'easters, 35-0, in the last game between these two schools and with the pre-Thanksgiving showdown serving as the final game of the season for each team this time around, Newington is looking to exact some revenge on its cross-town rivals.

“This is the game that we look forward to all year because it is our rival,” Nor'easters coach Jason Pace said. “I know a lot of players weren't a part of it the last game but we really took a beating.”

Both squads enter the matchup following close losses two weeks ago as the Nor'easters fell to Windsor, 43-35, while Wethersfield got beat by Middletown, 16-13. Since neither team will move on to the postseason, Wednesday's season finale should have a playoff atmosphere to it.

“That's how we're going to treat it,” Pace said. “We know 7-3, as far as how they award points, won't make the playoffs, but we're going into it like it's the most important game of the year.”

During the 2019, Newington and Wethersfield qualified for the Class L playoff bracket, but each lost in the quarterfinals.

Eleven Nor'easters seniors will play their final high school football game of their career on Wednesday, including Austyn Howe. Newington's No. 8 posted three touchdowns and three interceptions at Windsor and will likely be the key against the Eagles this week.

“All year we stressed the importance of the season and made sure we gave back to the seniors,” Pace said. “We put emphasis on this game because it'll be the last game for the seniors. It's been an honor to coach this senior class.”

Quarterback Padraig Brown surpassed 2000 passing yards during the Nor'easters' last game as the junior currently sits with 2097 as well as 29 passing touchdowns.

Shakir Smith is 14 rushing yards away from 700 and leads Newington in running scores with eight, followed by Howe's five.

The receiving corps has been highlighted by Howe and Josiah Ross with 24 touchdown passes between the two. Ross has compiled more yards at 807, but Howe has snagged for Tds with 13.

Wethersfield had previously won four straight before its loss to Middletown, which effectively eliminated its chances for a playoff spot. The Eagles' prior two defeats came against Windsor and Bristol Central.

The Nor'easters rebounded earlier this month after dropping two consecutive games with a pair of wins against Berlin and Platt, before their loss to Windsor. Newington hopes it'll show more of the six win side than the three loss side against Wethersfield.

“We're happy with the way we played down the stretch,” Pace said. “Just need to clean up a couple of things. We had a good week and a half of practice and our focus is to do what we need to do to go 1-0 [Wednesday].”

Kick off at Alumni Field is set for 6 p.m.