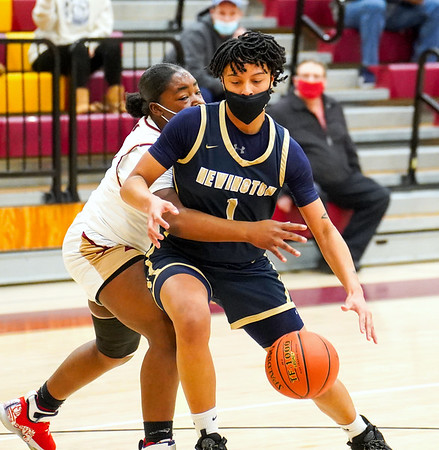 Lilly Ferguson backs down a New Britain defender during the Nor'easters' 43-20 win over the Hurricanes on Thursday. | Dan Heary Buy this photo
Published on Thursday, 23 December 2021 19:48
Written by MATT HORNICK

NEW BRITAIN - Scoring was hard to come by for the New Britain and Newington girls basketball teams the day before Christmas Eve.

The Hurricanes hosted the Nor’easters in an early-afternoon contest in which Newington maintained its undefeated start to the season with a 43-20 victory on the road. Newington senior Lilly Ferguson led all scorers with 18 points, but neither team made shots with the consistency they wanted to.

Both teams executed well defensively as the Nor’easters limited New Britain to an average of five points per quarter while the Hurricanes forced Newington to score primarily from the outside. The Nor’easter’s offensive rebounding was crucial because even though they did not make many of their three-point attempts, New Britain struggled on the defensive glass and allowed several second-chance shot opportunities.

Newington jumped out to an early lead and held New Britain to three points in the first quarter. Ferguson had 11 at halftime as the Nor’easters led by 12 points, but freshman Bela Cucuta was the only other player to make more than one shot in the first half as Newington struggled to find the basket.

Cucuta was the game’s second-leading finished with nine points, which is more than the Hurricanes scored in any quarter. Tancredi hopes to see the scoring numbers go up for everyone on his team because they are still creating and finding good shots, but are failing to make them consistently.

“We need to do a better job of spacing,” Tancredi said. “We just have to get back in the gym and keep taking more shots because we’re not knocking them down right now. Our field goal percentage is not great. The shots are there, we just need to knock them down.”

Despite not posting as many points as it wanted, Newington caused worse shooting problems for its opponent. New Britain never made more than two field goals in a quarter and struggled to initiate much offense because of the Nor’easter’s stifling defense. The Hurricanes made a series of turnovers and often gave the ball away before taking a shot as Newington stole possessions throughout the game.

“We tried to have a high ball screen to take off some pressure, I’m not so sure we executed that really well,” Piper said. “They did a good job with Leila [Mejia] and Leila is a kid who scores for us. I don’t think we got enough looks for her, she definitely needs to be able to shoot the ball a little bit more.”

Up next for the Hurricanes will be a road game against Career Magnet (0-2) at 2 p.m. on Tuesday while the Nor’easters will travel to Newtown on Monday.