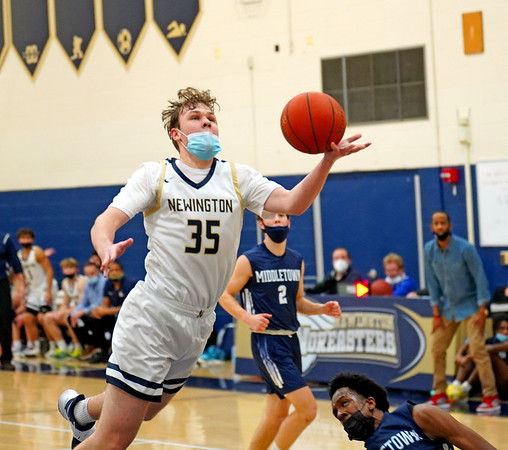 Newington's Noah Tharaldson shoots a layup during the Nor'easters' 65-57 win over Middletown on Feb. 3. | Dan Heary Buy this photo 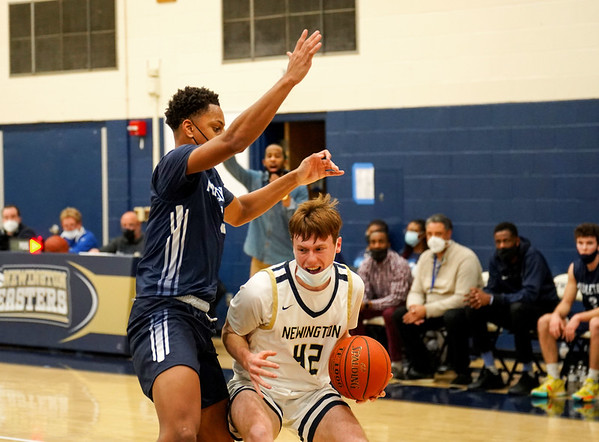 NEWINGTON ‚Äï Newington boys basketball‚Äôs nine-point lead at the start of the fourth quarter Thursday night was nowhere near safe against a talented Middletown team.

The Nor‚Äôeasters trailed by nine after one quarter, but took the lead in the third quarter and started to pull away from the Blue Dragons. While Newington let its opponent get close to tying the game, Middletown never came inside of a three-point deficit late in the game.

Fully prepared for the pressure of the moment, the upperclassmen-heavy Nor‚Äôeasters made 13 out of 17 free throws in the fourth quarter and did everything necessary to keep the Blue Dragons from tying the score. Newington earned their seventh victory of the season with a final score of 65-57 for their most significant and probably most challenging win so far.

‚ÄúWe practice the two-minute drill every day,‚Äù senior Sean Hurley said. ‚ÄúWe practice late-game situations and we were ready for that, we were prepared for that. Stuff like that doesn‚Äôt phase us.‚Äù

The win brings Newington‚Äôs record above .500 at 7-6 so far this year with seven more games to bolster their record before the postseason. Up next will be one of the two most daunting opponents remaining on the schedule when they host Xavier (8-6) on Saturday.

‚ÄúYou have to get wins like this under your belt,‚Äù Newington head coach Ed Quick said.

Squeaking out a tightly-contested win over a skilled team shows the Nor‚Äôeasters are learning from their close losses earlier this season. Newington fell to New Britain by two points in its third game of the year and came short by five points against Bloomfield during a four-game losing streak.

Now on a four-game winning streak, will try to keep this successful run alive by capitalizing on what was effective against Middletown. The Nor‚Äôeasters completely changed how their offense and defense performed after the first quarter and altered the complexion of the game.

‚ÄúIt‚Äôs always about trying to build and getting kids to believe in each other and believe in us,‚Äù Quick said. ‚ÄúIt‚Äôs a great win for our program, but it‚Äôs a great testament to [the players] and they‚Äôre ability to stick to it. [Middletown] is a talented team, but we work on [late-game situations], we talk about them openly.‚Äù

Along the road the rest of this regular season for Newington will be a home game against Windsor, which is one of the highest-scoring teams in the state and most likely the best team the Nor‚Äôeasters will face all year. While there is no shame in losing to a team of that caliber, Newington displayed the composure to compete with any team for 32 minutes.

The team‚Äôs response after struggling in the first quarter showed a strong awareness of how they play their best and an ardent pursuit to implement that style and pace of play. Quick said other teams should be weary of his side as they build momentum and will look to prove himself right over the next seven games.