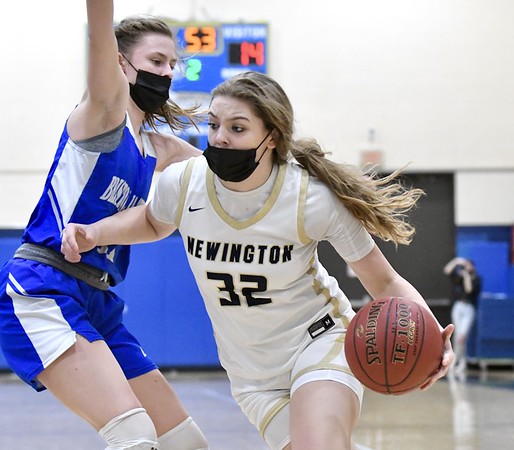 Newington's Kendall Miller drives to the basket against Bristol Eastern's Ciara Collins during the Nor'easters win over the Lancers on Thursday in the first round of the CCC Tournament. | Laura Bailey Buy this photo
Published on Sunday, 20 February 2022 20:53
Written by MATT HORNICK

ENFIELD – Newington girls basketball punched its ticket to the semifinals of the Central Connecticut Conference Tournament with a 44-21 win over seventh-seeded E.O. Smith.

The second-seeded Nor’easters will face sixth-seeded Southington on Tuesday at Enfield High School for a chance to face the winner of ninth-seeded Windsor and fourth-seeded East Hartford.

Newington’s defense secured the win Saturday and made the team’s jobs on offense much easier by never letting E.O. Smith score more than six points in a quarter. Senior Lilly Ferguson (11) and freshman Bela Cucuta (15) combined for more than the Panthers’ 21 total points in the game. Ferguson added eight rebounds and four assists as the Nor’easters are two wins away from repeating as conference champions.

St. Paul 66, Watertown 51: Zoey Rubins was two rebounds and one assist away from a triple-double as the third-seeded Falcons opened their run in the Naugatuck Valley League Tournament with a decisive win over sixth-seeded Watertown.

Up next for St. Paul in the semifinals will be a rematch against second-seeded Seymour, which the Falcons beat 57-49 in Bristol on Jan. 26.

St. Paul took a nine-point lead into halftime, and after a high-scoring third quarter took a small piece off the advantage, the Falcons pulled away in the final period to earn a spot in the semifinals. Junior Nadia Riemer led all scores with 24 points, including four three-pointers, while sophomore Audrey Tice posted 12 points and senior Sam Naples finished with nine points and seven rebounds.

Plainville 54, South Windsor 37: 18 points from Joe Vasquez and 15 points from Cam Lamothe on Saturday earned the Blue Devils their sixth win of the season.

The two combined to nearly outscore South Windsor as Plainville nears the end of its season. The Blue Devils play their final game of the year Tuesday when they host Berlin (14-5).

Zach Thompson sunk the game-winner for New Milford after neither team scored for the first 33 minutes of play and then each scored twice in the final 12 minutes of the third period. Jacob Nelson put the Terriers on the board first and then sent the game to overtime with his second goal crossing the line with one second left in the third period.

Graham Mitchell scored both New Milford’s third-period goals, tying the score 1-1 with 6:38 left to play and then giving his team the lead in the final two minutes.

The Terriers finish their season with a pair of road games, starting with South Windsor on Wednesday, followed by the Newington Co-op on Saturday.