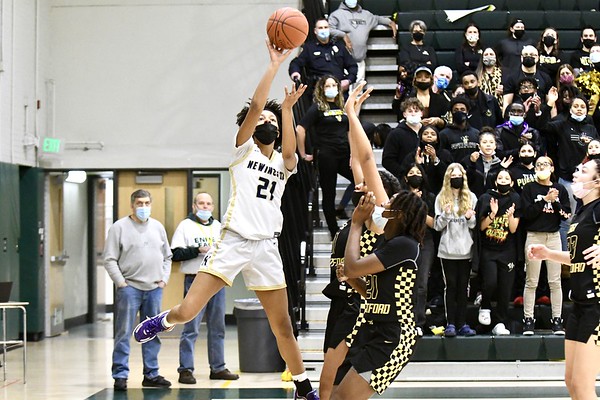 ENFIELD ‚Äï Leading by two with less than four seconds to play was not enough for the Newington girls basketball team to repeat as Central Connecticut Conference Champions.

A buzzer-beating three from Kayla Henry gave the Hornets a 31-30 win over the Nor‚Äôeasters to send both teams into their respective state tournaments with 22-2 records. East Hartford is responsible for both of Newington‚Äôs losses and needed every second to secure the victory in a back-and-forth defensive battle.

Henry finished with nine points, but Shailyn Pinkney (17) finished with more than half of the Hornets points. Senior Lilly Ferguson led the Nor‚Äôeasters with 14 points, making nine of 10 free-throw attempts, and was supplemented by 10 points from freshman Selah Prignano, who contributed timely baskets throughout the game.

While scoring was difficult for everyone, East Hartford kept Bela Cucuta, Newington‚Äôs second-leading scorer, out the score book Thursday,

‚ÄúWe didn‚Äôt shoot the ball very well,‚Äù Newington head coach Marc Tancredi said. ‚ÄúThe last meeting we had, we shot it a little bit better, but our defensive philosophy was much more fine tuned [this time]. I thought we did a good job of limiting their opportunities to get to the rim, forcing them into shots we wanted them to shoot. I was really proud of our defensive effort.‚Äù

Newington had the ball with 54.8 seconds out of a timeout, and called two more timeouts as it worked the clock down to 10.8 seconds. Ferguson made both ends of a one-and-one after getting fouled on a drive to the basket to give the Nor‚Äôeasters a 30-28 advantage with 3.7 seconds on the clock.

‚ÄúI was thinking we had a really good shot,‚Äù senior Karissa Zocco said. ‚ÄúWe all were kind of celebrating [in the huddle] like we just won it and sometimes you just can‚Äôt celebrate too soon.‚Äù

More than two minutes elapsed before anyone scored in the fourth quarter, until Prignano netted her second triple of the game to give the Nor‚Äôeasters a 26-23 lead. A free throw from Pinkney and a scoop layup from Henry answered Prignano‚Äôs shot, but she put her team back in front with two shots from the foul line.

Henry knocked down a pair of foul shots to tie the score 28-28, but missed two more shortly after with a chance to give East Hartford the lead.

Defense was the obvious priority for both sides from the opening tip as every basket was a hard-fought endeavor. Threes from Zocco and Ferguson gave Newington an early lead, but East Hartford stayed close behind the whole time and took the lead by the end of the first eight minutes.

A three-pointer from Nia Edens gave the Hornets their first lead of the day and Pinkney‚Äôs first score of the day kept them in front, netting a layup in the final seconds of the period.

‚ÄúWe switched the defensive philosophy from the first time we played them,‚Äù Tancredi said. ‚ÄúWe did a really good job of staying connected to Shailyn and [Edens] and everybody else did their job. That‚Äôs been us all season, playing solid defense and knowing that the offense will turn it up at some point.‚Äù

Pinkney took control of East Hartford‚Äôs offense in the second period, scoring all nine points the Hornets scored in the quarter. She scored from inside and out, finishing challenging shot attempts near the basket and hitting jumpers around the court..

The Hornets led by as many as five points in the second quarter, but failed to maintain that by halftime. Prignano scored her first two baskets of the game, including a corner three in the final 10 seconds of the half to cut the deficit to one point at the break.

‚Äú[Prignano] stepped up, I‚Äôm really proud of her,‚Äù Zocco said. ‚ÄúShe hit the important shots, she played great defense on [Pinkney], she did everything she needed to do.‚Äù

The defense tightened up even more in the second half, as Newington tied the score to enter the fourth quarter, and needed just four points to do so. The Nor‚Äôeasters held East Hartford to three points in the third quarter, all free throws from Pinkney, while the Hornets held them to four points.

The defense held strong for most of the period, but Newington missed two opportunities to take the lead late in the quarter when Ferguson and Prignano failed to hit shots near the rim on consecutive possessions.

‚ÄúThis game was a lot more competitive [than the last meeting],‚Äù Zocco said. ‚ÄúWe really brought it, they really brought it, it was a great battle. Both teams fought really, really, well, it just wasn‚Äôt the outcome that we wanted.‚Äù

The Nor‚Äôeasters are now off until March 4, as they are the No. 1 seed in the Class L state tournament and received a bye through the first round. Their second-round matchup will be between the winner of No. 16 Bristol Central and No. 17 Platt.