Candidate Corby-O'Neill not willing to 'sit on the sidelines' 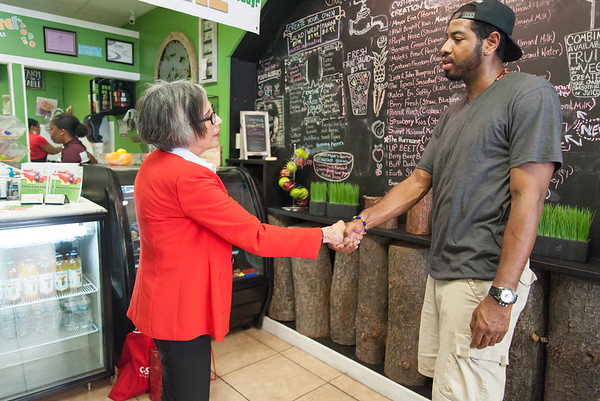 08/02/18 Wesley Bunnell | Staff Ruby Corby O'Neill shakes hands after speaking with Juann McClendon at Sweetwater Juice Bar & Deli on Thursday afternoon during a stop on her tour of downtown New Britain. O'Neill is running for for Congress for Connecticut's 5th district. Buy this photo

08/02/18 Wesley Bunnell | Staff Ruby Corby O'Neill speaks with New Britain Industrial Museum volunteer Roger Thorin as she buys a Avery's Sods sign during a stop on her tour of downtown New Britain. O'Neill is running for for Congress for Connecticut's 5th district. Buy this photo

Wesley Bunnell | Staff Ruby Corby-O’Neill speaks with the executive director of the New Britain Downtown District, Gerry Amodio, during a stop on her tour of downtown New Britain, Thursday. Buy this photo

08/02/18 Wesley Bunnell | Staff Ruby Corby O'Neill holds a level manufactured in New Britain which is on display at the New Britain Industrial Museum during a stop on her tour of downtown New Britain. O'Neill is running for for Congress for Connecticut's 5th district. Buy this photo

“I think New Britain is happening,” O’Neill said while enjoying a break from her walk downtown. “There’s so much energy and youthfulness and activity on the streets here and in the businesses.”

Vincent Placeres, owner of Mofongo and The Kitchen, served as O’Neill’s de facto tour guide for the afternoon, taking her to his restaurants and other new businesses like Sweetwater Juice Bar & Deli and The Hive.

The candidate also visited the New Britain Industrial Museum to learn more about the city’s manufacturing history and even popped into the Visitors Center to talk politics with Gerry Amodio, executive director of the Downtown District.

O’Neill spent much of her day speaking to residents on the street and asking what they wanted from their Congressional delegation. Thursday’s visit offered an alternative to the mailers, fliers and town hall meet-ups that frequent political races.

O’Neill said she prefers it that way.

“That’s how I like to do it,” O’Neill told The Herald. “That’s how I was when I was an advisor to students in college, I would say ‘Come and sit down and let’s talk. I don’t want to know what major your parents want you to study. I want to know about who you are. Then we can talk about courses that you should take.’”

Like them, job creation, the economy and strengthening the country’s immigration policies are frequent talking points.

But O’Neill has found another pillar she’s running on as well: combating the opioid epidemic in the country. The candidate said she believes opioid addiction has affected most Americans, whether themselves or someone they know.

“I know that jobs and the economy are important, but if we don’t slay that dragon, we’re not going to have an economy,” O’Neill said.

When asked why she entered the race in April, the former professor was frank: O’Neill said her Republican counterparts don’t stand a chance in winning the seat.

“I realized he has a zero chance of winning this,” O’Neill said of Santos, the party’s endorsed candidate. “This seat is much too important with what’s going on in this country right now. It was too important and I couldn’t sit on the sidelines anymore.”

O’Neill thinks both Santos and DuPont, the other Republican running for the seat, would be disastrous against their Democratic opponents.

“Jahana Hayes and Mary Glassman will chew them up and spit them out and hand them back to themselves. They (Santos and DuPont) will not be able to take them out, no way,” O’Neill said.

For this reason, O’Neill said she’s confident her message will translate to voters.

The primary election is Tuesday, Aug. 14.