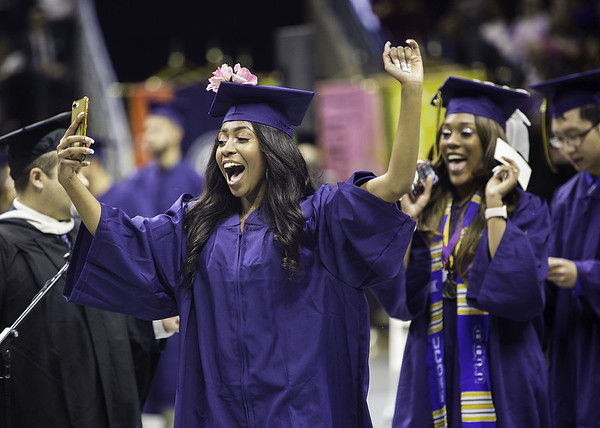 Sunday afternoon, Leer Porter, snaps a selfie with friend, Jordan Davis a few feet behind her, at Gampel Pavilion in Storrs during the UConn Liberal Arts graduation. /Amelia Ingraham Buy this photo
Published on Monday, 13 May 2019 20:10
Written by MICHELLE FIRESTONE

STORRS - William WilsonŌĆÖs mother raised him and his five siblings alone after his father died when Wilson was only 12 years old.

His family was poor and one of few black families in their small, western Pennsylvania town.

As one of WilsonŌĆÖs colleagues once pointed out, the odds of him becoming a sociology professor at Harvard University were ŌĆ£probably one in a million,ŌĆØ he said.

But, as the College of Liberal Arts and Sciences commencement speaker told an audience Sunday afternoon, his successes were about ŌĆ£being in the right place at the right time.ŌĆØ

ŌĆ£Perhaps your background is more humble, perhaps more fortunate, but opportunities nonetheless served as a foundation that you built on with your own hard work in high school and here,ŌĆØ Wilson told graduates during the CLAS undergraduate commencement ceremony at Gampel Pavilion.

He received an honorary doctorate during the ceremony.

According to the university, about 3,000 undergrads received diplomas between the two CLAS commencement ceremonies Sunday, with one held in the afternoon and one in the evening.

Most of those commencements took place over the weekend, with the last ceremony being May 19 at the UConn Law School in Hartford.

Wilson said, when he graduated from high school in 1953, he lacked confidence and was undecided about what he wanted to do with his life.

That all changed when he met Robert Howell, a student at Wilberforce University in Ohio, a historic black college, who inspired him to enroll at Wilberforce.

ŌĆ£Now when I say that I was in the right place at the right time when I enrolled at Wilberforce, I mean that it was the perfect environment for me to develop the kind of self-confidence and sense of efficacy that would help to propel me on to greater things in life,ŌĆØ Wilson said.

Student speaker Odia Kane, a cognitive science and political science major, spoke about some of the accomplishments of UConn students.

Those included raising a record-setting $1.33 million for the Connecticut ChildrenŌĆÖs Medical Center during Huskython and getting UConn officials to change the bus schedule.

ŌĆ£A typical UConn student is an advocate, a scholar and an active community member,ŌĆØ she said.

Kane told her peers they may not have gotten the grade point average they wanted, but they still ŌĆ£made it to the finish line.ŌĆØ

ŌĆ£Remember, even if your umbrella hasnŌĆÖt, youŌĆÖve conquered the Storrs wind,ŌĆØ she said, an analogy appropriate on a rainy Sunday.

UConn graduates have a variety of post-graduation plans, with some choosing to take time off school before attending graduate school.

Hannan Mir, a biology major from Pakistan, said he will be conducting cancer research at New York University beginning this summer.

ŌĆ£Cancer is a very booming field and thereŌĆÖs a lot of funding for it,ŌĆØ he said.

Mir said he plans to attend graduate school in the future, though he is not sure if he wants to pursue a medical degree or another type of doctorate.

Chaplin resident Nicole Rusch, a cognitive science major, said she is planning to take a year off before attending graduate school.

She is interested in sports management and will be volunteering with the UConn volleyball team, helping them with operations work, in addition to working a part-time job elsewhere.

Rusch decided to live on campus while at UConn, despite living so close to home.

ŌĆ£It kind of teaches you to be independent,ŌĆØ she said.

Rusch said she got used to living away from home as a student at The Ethel Walker School, a boarding school in Simsbury.