Lisa Massicotte | Chronicle Staff No Excuses March for Education rally attendants and parade participants gather at the New Haven Green on Thursday where they listened to several adult continuing education graduates, state representatives and education professionals speak on the value of not giving up on obtaining an education. Buy this photo 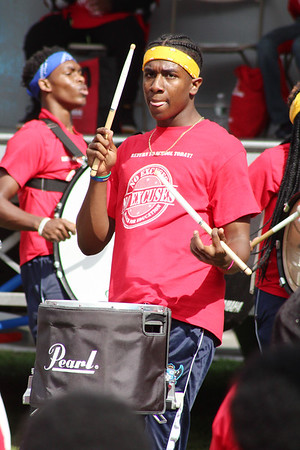 NEW HAVEN - Several hundred people, representing adult education centers throughout the state, unified under the principles of “no excuses” to obtain a high school equivalent education, marched down city streets on Thursday.

Surging with enthusiasm and energy, adult education advocates, professionals and students joined the “No Excuses March for Education.”

Together, they all formed a massive sea of red T-shirts as they marched down numerous streets from the New Haven Adult Education Center to the New Haven Green, where a rally was held through the early afternoon.

The EastConn Adult and Community Programs Division made up a section, nearly 50 strong, of that sea.

EastConn, a regional nonprofit educational services agency based out of Hampton, sent two buses from its adult education centers in Willimantic and Danielson.

Several local New Haven residents, hearing the excitement, gathered outside their homes and offices and waved at the marchers in support.

“I think that it’s just an amazing thing seeing everybody of all walks of life come together to support education for all in the communities,” said Torya Smith, who was watching the march from outside her office at Cornell Scott Child and Family Guidance Services.

The slogans of the march, which was organized by the New Haven Adult and Continuing Education Center, were crafted carefully by Veronica Douglas-Givan, who is the center’s family advocate and community resource coordinator.

Douglas-Givan explained “no excuses” means adult education centers offer free programs and are always willing to work with anyone - people of all ages, cultures, ethnicities, socioeconomic statuses, etc. - to get them to a place where they are ready to continue their education.

She also said “the struggle is real” is an acknowledgment there are countless obstacles and deterrents that push people away from completing their education, whether it be obtaining a high school diploma, GED or learning how to speak English.

“We are not blaming the victim, and we know the struggle and barriers are real and difficult,” Douglas-Givan wrote in a recent release.

“I have a student right now who is an older student and he’s been here 15 to 18 years and still doesn’t speak much English and he says ‘Elizabeth, I work 12 hour days, seven days a week, for 20 years, but this is the first time in my life that I have a little bit of extra time to dedicate to my education,’” Acosta said.

Acosta also noted she has observed many ESL students struggling to find ways to practice English outside of class.

She said many of the students tend to either work a job that has minimal human interaction or they prefer to stay inside their comfort zone, mostly associating themselves with others who speak their same first language.