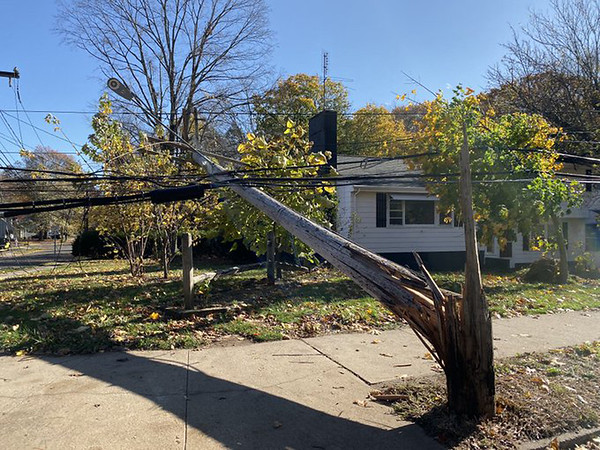 Photo by Mayor Erin Stewart Wind damage on Stanley Street in New Britain tweeted out by the mayor Friday morning. Buy this photo

NEW BRITAIN – Five poles were knocked down by a pine tree that fell across Stanley Street just north of Eddy Glover Boulevard in the early hours of Friday morning, leaving about 185 homes without power.

The incident happened around 2 a.m., according to the Eversource Power Outage Map.

“Thankfully this is the only area in town that is affected like this,” said Mayor Erin Stewart. “We’ve got some branches and some trees down in other areas but nothing like this.”

The pine tree fell against utility wires, which pulled down a pole in front of St. Francis of Assisi Church, and the other poles subsequently because they are all connected, Stewart said.

The wires connected to the other poles then knocked down another tree as they were falling eastward, which took out another tree that landed against a home just south of the church.

“With 50 60 mile per hour winds, that tree came down with some force,” said Stewart.

No injuries were reported in the incident, Stewart said. The home hit by one of the trees received some gutter damage. The pine tree landed in a yard just north of the church and took out a sign, as the pole in front of the church landed on the steps falling just short of the church’s entrance, according to Stewart.

Tree crews are at the scene but because Eversource hasn’t arrived to the scene as of about 11 a.m. to officially de-energize the lines, which potentially could still be live, they can’t do anything, Stewart said. Once that happens, then crews will have to work to raise the poles all at once because of them all being connected.

An Eversource spokesperson said it is unclear when crews will be arriving as the company is responding to about 135 towns that experienced some sort of power damage from the storm. Responses to 911 emergencies, live wires and places like hospitals, nursing homes and emergency service stations are being prioritized, the spokesperson said. Initially reports are it could take two days to fully repair the Stanley Street incident because of the damage across the state, but the spokesperson could neither confirm nor deny that until crews arrive and assess the damage.

With 65 mile power hour winds and rain Thursday night, the peak amount of outages across the state was about 86,000, with crews working throughout the night making repairs, the spokesperson added. Towns immediately surrounding New Britain has no more than 35 power outages as of 9 a.m., but West Hartford at one point had 1,200 customers out.