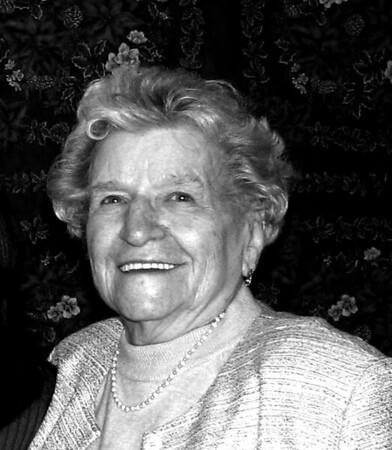 Helen was born to Rosalia and Konstanty Kaczynski in New Britain, on Dec. 22, 1928, the youngest of eight children. She met her husband, Patrick Brennan, at a dance, and the pair married on July 2, 1952, at Holy Cross Roman Catholic Church in New Britain. Together they raised three children, uncountable pinochle bids, and occasionally, holy hell. Patrick died in 2015, and the family will cherish the memory of the couple’s final (64th) anniversary celebration, during which Patrick played for Helen “The Anniversary Waltz” and led her in a dance in the kitchen. Helen worked for many years as a secretary and administrative assistant, including over two decades at the Berlin Board of Education. Never one to sit still, after retirement, she worked odd part-time administrative jobs well into her seventies. Though beset with advancing dementia in her later years, she retained her sass and her spark, as well as her love and appreciation for family and friends, until her final days. She will be remembered for her fierce pride in her Polish heritage, her love of being a grandmother, her boxes and boxes of Christmas decorations, her love of cardinal birds and all things red, her love of animals, especially her pets, and her occasional habit of cussing in front of the grandchildren when she got dealt a bad hand at cards.

Helen was predeceased by her parents, husband, and siblings.

She is survived by her three children, Patricia Pule (Dan) of Tobyhanna, Penn.; Karen Larson (Jim) of Ephrata, Penn.; and Daniel Brennan of Sedona, Ariz., as well as four grandchildren and one great-grandchild and several nieces and nephews.

Her funeral services were held on Friday, Nov. 1, at Zion Lutheran Church, Leola, Penn. Her cremains will be interred along with those of her husband at a date to be determined by the family in the couple’s hometown of New Britain. In happy remembrance of the joy Helen received from watching birds in her backyard, the family suggests that memorial donations be directed to the National Audubon Society. Alternatively, a memorial donation to the Alzheimer’s Association would be appreciated. Online condolences may be sent to alhome.com.