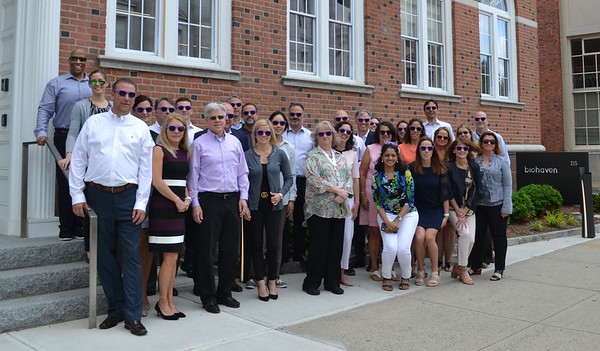 Founded in 2013, Biohaven is a rapidly growing company focused on neurological innovation and developing products that address several of the most disabling and devastating neurological disorders, such as migraine, Alzheimer’s disease, and anxiety. The company was created to fill what the founders saw as a void in neurology research in the pharmaceutical industry.

“This is Connecticut innovation at its best. Migraines can be a nightmare and hamper people’s ability to function, and Biohaven is leading the way in finding an innovative cure. I’m proud to highlight Biohaven as this month’s innovator and encourage investment in treating neurological conditions. I look forward to watching this company continue to grow right here in Connecticut,” said Murphy.

Vlad Coric, M.D., CEO of Biohaven, said, “Biohaven is grateful to Senator Murphy for this recognition and for his strong commitment to supporting innovation to improve lives and stimulate economic development. Biohaven has thrived in the entrepreneurial spirit and strong sense of community here in New Haven, Connecticut. Our goal at Biohaven was to create an organization that is focused on unmet medical needs and add value for our patients and shareholders while maintaining an efficient and high performing culture. New Haven has been an ideal location for Biohaven, given its proximity to Yale and highly skilled pharmaceutical talent that sits in the geographic corridor between New York and Boston.”

Biohaven currently is seeking Food and Drug Administration approval for its first medicine, rimegepant, a calcitonin gene-related peptide antagonist that targets the body’s neurotransmitter that is the root cause of a migraine headache. Migraines are a leading cause of disability worldwide and Biohaven’s data, published in the New England Journal of Medicine and The Lancet, show that rimegepant works for many patients within minutes, restores normal functioning and its effect can last for two days after a single dose.

Biohaven’s portfolio also includes a wide pipeline of innovative late-stage product candidates including troriluzole, a glutamate modulator being studied for the treatment of mild to moderate Alzheimer’s disease, and verdiperstat, a myeloperoxidase inhibitor being studied for multiple neurodegenerative disorders. The company recently received encouraging news that its study of troriluzole in Alzheimer’s passed an interim futility analysis after the first 100 patients completed 6 months of treatment.

Biohaven started small with only a few employees in the back office of a clinic and was initially founded upon intellectual property related to Coric’s work on glutamate modulating agents licensed from Yale University. Biohaven went public in 2017 and its common shares are listed on the New York Stock Exchange traded under the ticker symbol BHVN. Biohaven has grown to over 600 employees and has raised over $1.1 billion to fund its research and development activities. Biohaven has established an impressive presence in New Haven by renovating a building just off the Yale University campus in the heart of the New Haven financial district.

Murphy believes entrepreneurship and innovation are the building blocks for a strong economy. In the Senate, he has introduced two bipartisan pieces of legislation to incentivize angel investors to put more money into startup companies - the Angel Tax Credit Act and the Helping Angels Lead Our Startups (HALOS) Act. Startup companies create an average of 2 million jobs each year.