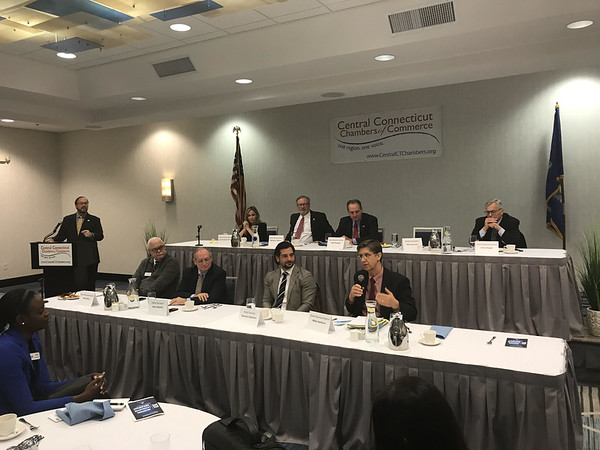 BRISTOL - The Central Connecticut Chambers of Commerceâ€™s Regional Legislative Breakfast saw area legislators address a variety of topics, from the stateâ€™s strengths to how it can improve its workforce.

The Thursday morning meeting at DoubleTree was attended by local leaders, business owners and heads of nonprofit organizations from several surrounding towns. Following the program, which was moderated by Paul Lavoie, co-chair of the chamberâ€™s Regional Legislative Action Committee, they had an opportunity to question the visiting politicians.

Cindy Bombard, president and CEO of the chamber, welcomed guests to the chamberâ€™s first event of 2020.

Lavoie explained that the Regional Legislative Action Committee was a bipartisan group that â€śdoes not see things in red or blue, but in green - the color of money.â€ť He said that their job is to listen to the concerns of the business community and then bring those concerns before legislators.

The first topic was what legislators thought the strengths of Connecticut to be.

Piscopo said that Connecticut is a â€śland of ingenuityâ€ť and said that it was also benefitting from a strong national economy. He added that the stateâ€™s deficit was â€śtrending down.â€ť

â€śWe were told that 2% growth was the new normal, but now we are seeing 3% and 4% growth,â€ť he said. â€śThis will help our businesses and nonprofits in the state.â€ť

Petit said the stateâ€™s advantages are its quality of life and its investment in bioscience development.

Pavalock-Dâ€™Amato, who practices law in Connecticut and Florida, said Connecticut has â€śmore opportunities to attract businesses, build and grow.â€ť

Bizzarro said the state has â€śtremendous untapped potentialâ€ť and is blessed by its proximity to New York and Boston.

Martin said the state has a highly educated workforce and noted that apprenticeship programs are being expanded not just to manufacturing but finance, medical and trade sectors as well. He said that the state has done well to implement spending and bonding caps.

Betts praised the quality of the hospitals and medical care in the state and said Connecticut is known for having manufacturers whose skills touch many industries.

The second topic was what Connecticut could do to develop its workforce.

Betts suggested removing burdensome unfunded mandates that were inhibiting the growth of small businesses. He said legislators need to reflect more on whether legislation that is well-intended is fiscally viable.

Martin said the Manufacturing Apprenticeship Committee was looking into German and Swedish apprenticeship models to see how youths could be introduced at a younger age to careers in sectors with a greater need.

Piscopo suggested removing a state regulation that mandates a 6-to-1 manager to apprentice ratio, thus bringing in more apprenticeship students.

Ziogas said there is much bipartisan collaboration on workforce development and said young people need to be made aware at a younger age that college isnâ€™t the only career path.

Demicco said education should be aligned with good-paying jobs and that they should be made known to young people at an earlier age.