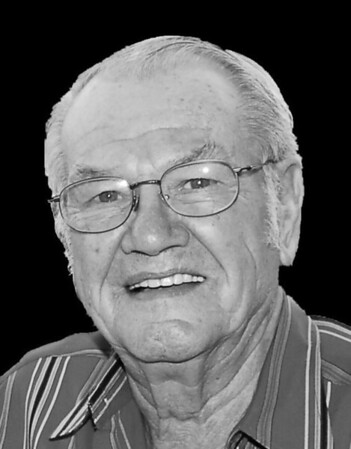 Richard M. Schaller, 91, died peacefully on March 13, 2020, at Masonicare of Wallingford, after a courageous battle with heart disease and COPD. He has joined his beloved wife of 62 years, Audrey (Barrett) Schaller and his son Gustave “Guy” Schaller in heaven. Richard was proud to have grown up on a tobacco farm in Manchester, where the farm also had its hands in peat moss and apple cider. He was a Newington resident for almost 60 years before moving to Rocky Hill in 2018. Richard, along with his father, was the original founder of Schaller Oldsmobile in New Britain in 1953. He was a successful businessman, and with his hard work and dedication, the business continued to grow. His next chapter was as owner of Hadfield’s Sporting Goods in Berlin for 10 years. Richard was a devoted member of the Knights of Columbus and the Church of the Holy Spirit in Newington, where he volunteered for many church projects. He loved to travel and loved telling stories of adventures in the Winnebago camper when his kids were young. He was a jack of all trades and was right there to lend a hand, especially when his six children became homeowners. Dad would give you the shirt off his back. He was a wonderful role model. He enjoyed being with his wife and family the most; the backyard pool, his boats, motorcycles, horseback riding, visitors to his condo in Ft. Pierce, FL and summers at Point O’ Woods Beach in Old Lyme, CT. He totally renovated and transformed the Newington house, a project he was rightfully proud of. He made his family laugh with his personality and the things he would do. It was best when he belly laughed along with them until tears would flow! He loved the homemade apple pies, pork and sauerkraut and chili relish he would make with his wife Audrey. He always joked that he should have bought stock in Oreo cookies. His greatest love was his family and he believed them to be his ultimate prize. He was happiest when surrounded by his children, grandchildren and great grandchildren. He was a fabulous husband, father and Pop who will be greatly missed. He leaves his children and their spouses, Richard (Kathy) Schaller of Rocky Hill, Greg (Nancy) Schaller of Waterford, Audrey Schaller and Joanne Schaller both of Durham, and Sandy (Gregory) Petela of Wallingford; grandchildren, Scott (Tammy) Schaller, Heather (Derek) Wenzel, Renee (Brian) Balda, Dana (Joshua) Sirios, Kelly (James) Cooper, Kevin (Lindsey) Schaller, Keith (Lauren) Schaller, Rebecca Caruso, Matthew Caruso, Eric (Lauren) Petela and Kirstin Petela; and great grandchildren, Olivia and Bryce Schaller, Chase and Addison Wenzel, Natalie and Colleen Balda, Everett and Eli Sirois, Nieve and Liam Cooper and Reed Schaller. His family would like to extend a special thank you to Aunt June Barrett, who provided them with unwavering comfort, love and support. His family would also like to express its heartfelt gratitude to the wonderful staff at Atria Greenridge Place in Rocky Hill, his home for the past two years, along with the caring nurses and aides this past month at Masonicare Hospice Unit 3 Central, for taking such great care of him and treating him as a member of their own family. A Mass of Christian Burial was held privately in the Church of the Holy Spirit, Newington. He was laid to rest with his wife Audrey and son Gus in West Meadow Cemetery, Newington. A celebration of his life will be held at a later date at a time to be announced at the Duksa Family Funeral Homes at Newington Memorial, 20 Bonair Ave., Newington. Memorial donations may be made to the American Heart Association, 5 Brookside Dr., Wallingford, CT 06492, or to the Juvenile Diabetes Foundation, 20 Batterson Park Rd., #302, Farmington, CT 06032, or to the American Cancer Society, 111 Founders Plaza, 2nd Floor, East Hartford, CT 06108. To share a memory with the family, please visit us at www.duksa.net .