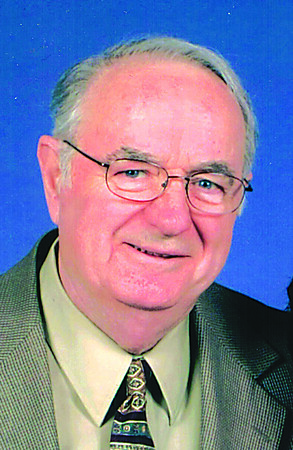 Bernard ‘Bernie’ McKinnon, 83, of Southington unexpectedly passed away quietly in his sleep on Saturday, Nov. 7, at Jerome Home in New Britain.

Born in Caribou, Maine to the late Fred and Victoria (Belanger) MacKinnon, Bernie moved to Connecticut in 1952 and after graduating from New Britain High, joined his parents working at Fafnir Bearing, becoming a UAW member in 1955. In addition to the union, Bernie was active in local politics and social justice issues. Many of his views on social justice were formed during his early years growing up with his four sisters and one brother in Caribou, picking potatoes and doing farm work, and during his early education at the Oblate of Mary Immaculate Seminary in Bucksport, Maine.

In 1963, Bernie got on the bus and marched in the Civil Rights March on Washington. He worked his way up through the ranks of his local union, eventually becoming a long time Local 133 President. Bernie served on the Board of Directors for various organizations including Catholic Family Services, the New Britain United Way, the United Labor Agency (ULA) and the Community Council. As Local President, Bernie led a six-month strike against Fafnir in 1979.

Bernie was next elected as the UAW Region 9A CAP President and then became the CAP Director. In this capacity, Bernie had responsibility for making sure the voices of UAW members were heard at the State Capitols throughout New England and personally lobbied in each one. Many Connecticut labor lobbyists and activists fondly recall getting help and learning the ropes at the Conn. State Capitol from Bernie in the years before the Legislative Office Building was built.

Bernie helped to establish the Conn. Citizens Action Group (CCAG), was active in the Legislative Electoral Action Program (LEAP) and the Conn. Caucus of Democrats (CCD). Bernie helped mobilize UAW political activity in local, state and federal elections. He organized busloads of UAW members to volunteer in New Hampshire during the Presidential primaries.

In 1991, Bernie was recruited to Washington D.C. to work for the UAW as a legislative activist. He spent nearly ten years on the Hill being a voice for all working people. Bernie gained the respect of members of Congress on both sides of the aisle as being a ‘real and genuine’ person that would speak the plain truth about how an issue would directly affect working people. While in D.C., Bernie was active in his county Democratic Committee and served as a Trustee for the National Democratic Club. Upon his retirement in 2000, Bernie returned to Connecticut.

Bernie is survived by his wife Judie, his patient and understanding partner for more than 59 years. He leaves behind one son Ken McKinnon and his wife Pam, two daughters Lisa McKinnon, and Jill McKinnon Hoffman and her husband Geoff. Also, grandchildren Michael, Patrick, Shawna and Peter, great granddaughter Sunny Mae, and numerous nieces, nephews, and godchildren. Bernie was predeceased by his brother Roch MacKinnon, his sisters Carolyn Malady and Angela Orzolek and sister-in-law Susan Fitzpatrick. He leaves behind his sisters Rita (and Tom) Agritelly, and Theresa King, his brothers-in-law Richard Orzolek and John (and Eve) Sarra. Bernie loved to be around people, was a natural leader and joiner. ‘Terrible’ Bernie’s smile and good nature will be sorely missed by all who knew and loved him. Solidarity Forever! The McKinnon Family thanks everyone at Jerome Home and Arbor Rose for their help, friendship, and thoughtfulness.

Due to COVID-19, funeral services will be private. DellaVecchia Funeral Home in Southington is in charge of the arrangements. Donations may be made to Foodshare or any progressive social organization of the donor’s choice. For online condolences please visit www.dellavecchiasouthington.com .