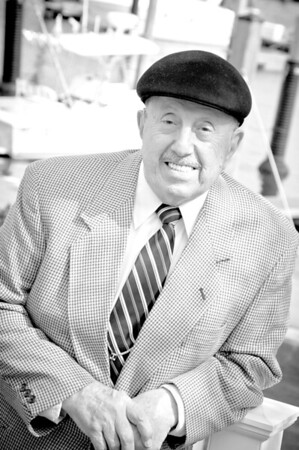 Joseph M. DeFazio was born on Dec. 7, 1925, to Guiseppe and Theresa (Costa) DeFazio in the town of Cardinale, Italy. He moved to New Britain at the young age of three. He attended all New Britain schools and graduated in 1944.

After graduation, he worked over 40 years for Fafnir Bearing/Textron in New Britain and Newington.

In 1955, Joe married Maria Pia, and they’ve been together ever since. Last July, they celebrated their 65th wedding anniversary.

Joseph would spend hours in his woodshop crafting or repairing projects for anyone who needed his help. He never said “no.” His trademark though, was his memory. He could still easily name every teacher he ever had, and about those infamous stories that started out with “Back in the day…..” He loved classic movies, the New York Yankees, UConn Women’s Basketball, hot peppers, and taking photos or movies with his cameras. He always looked forward to Saturdays where he and his son Robert would go for hot dogs and hang out. Of all his passions, however, he was such a devoted husband and father and a loving Nonno. Family always came first.

A Mass of Christian Burial will be celebrated at St. Ann’s Church on Wednesday, March 24 at 11 a.m., burial will immediately follow at St. Mary cemetery in New Britain. In lieu of flowers, please consider a donation to St. Jude’s Children Research Hospital.