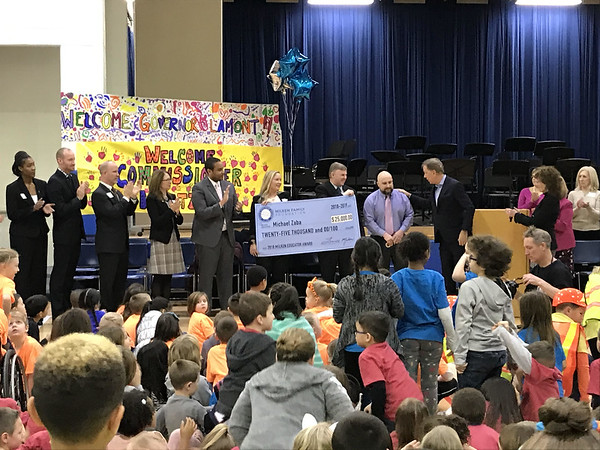 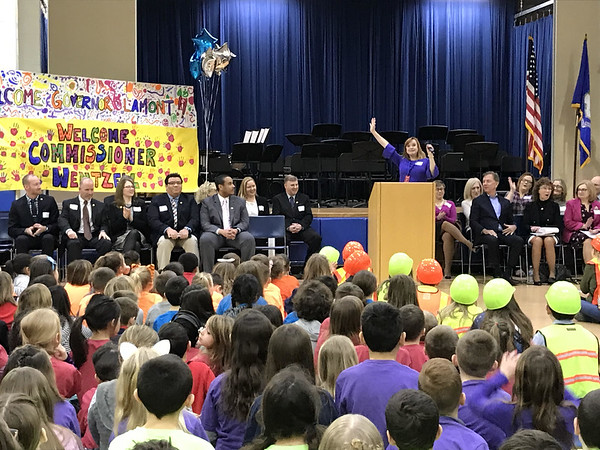 Superintendent of Schools Maureen Brummett asked Lamont if Toffolon was the first school he has visited as governor.

“It takes a whole community to give students what they need to succeed,” said Wentzell. “It’s clear that here in Plainville you’re getting it right.”

“I’m particularly excited by the maker space you have here,” she said. “I wish I had that when I was in school. It allows students to create from their imaginations, integrating science, reading, writing and math skills. It creates a culture of curiosity and discovery and, when kids have curiosity, they are able to problem solve and learn innovative and exciting concepts that will prepare them for the real world. It helps them to develop an ‘I can do that’ attitude.”

Jane Foley, Milken Educator Awards senior vice president, told the students she had come from California “3,000 miles through the rain, snow and cold” to to their school.

“Along with your parents, teachers and principals are some of the most important people in your lives,” she said. “It is their responsibility to prepare you for a better future, but people don’t say thank you to them enough.”

Foley said the Milken Educator Awards were established in 1987 to do just that. She teachers present to stand and be recognized. She then invited students up to slowly reveal the $25,000 that the award recipient would be given - presenting it first as $25 and then gradually adding zeros, getting the kids more and more excited.

Lamont was then given the honor of revealing the recipient, prompting cheers for Zaba.

Past award recipients joined Zaba at the podium and congratulated him.

“Anything I do is for the students I’m working with,” said Zaba. “It’s not just me; every teacher here is working hard to educate our students. I see so many wonderful things here at Toffolon School with math and art. If you take a look around, you’ll see that our school is decorated up and down with art. It’s what I live for every day - to inspire students, change their lives and help them to see things in different ways. I am really grateful for this opportunity.”

Milken Educator Awards will be given to 33 teachers in 2018-19, and Zaba is the only Connecticut recipient.