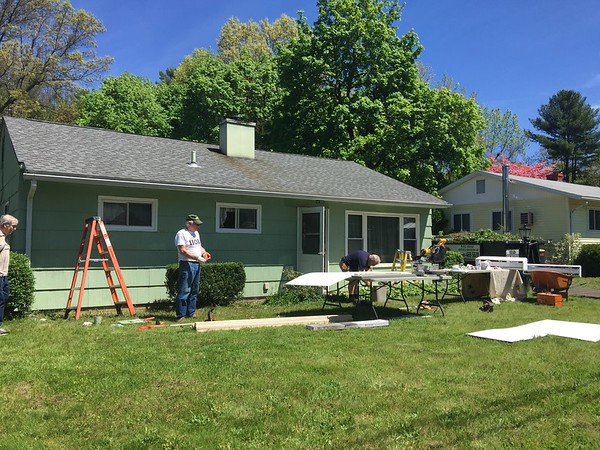 PLAINVILLE - Mike Hall, a veteran and cancer survivor, had an extra pair of hands to help him around the house Saturday.

Actually, there were 45 pairs of hands. They painted his home. They installed a walk-in shower, new floor and grab bars in his bathroom. They did yard work. They even replaced the shingles on his garage roof.

House of Heroes Connecticut and Plainville Rotary organized the volunteering effort, which included volunteers from the rotary, House of Heroes, The Honorable W. Patrick Donlin Assembly #2459 of the New Haven Knights of Columbus, Plainville VFW and the Plainville High School football team.

President of the rotary Stacy Buden said it was the second year that the club has worked with House of Heroes to help out a veteran.

“Our motto is service above self,” Buden said.

Volunteers, no matter where they were from, embodied that motto Saturday as they raked, painted and cleaned up.

“It’s fantastic - on one of the most glorious days of the spring. It’s a wonder that so many people can give their time to help out today,” said Tony Famiglietti, a 35-year member of the rotary.

“They felt pretty strongly about it,” said football coach Tim Shea. “They were more than happy to help.”

“I thought it was a really good cause for a veteran who needed the help,” said Ryan Barker.

“I wanted to just help out with the community. It’s just being nice, helping out. Coach says you should always do more for others than you do for yourself,” said Alex Wynkoop.

“This is a really special day. Having 45 volunteers out here - it’s one of the largest groups,” said Dennis Buden, executive director of the Connecticut chapter of House of Heroes. Buden said that because they had so many volunteers, they were able to scrape and paint the home, something the nonprofit hasn’t done before.

“We knew we had the Plainville football team coming so we knew we could tackle it,” Buden added.

Carol May is the chairperson of House of Heroes CT and co-chair of the national organization.

May’s husband, Lt. Col. Bill May, started the chapter with Steve Cavanaugh in 2012. Though Bill May has passed, Carol May says they are passionate to carry on the work. Since 2012, the nonprofit has worked on 114 houses.

“It’s honoring service with service,” Carol May said. “A lot of these volunteers with us today have been with us for over 100 homes.”

She said she was especially happy that the football team joined in on the volunteering effort.

“Hopefully it’ll become a passion for them and something they’ll continue for the rest of their lives,” May said.

“The reason why I nominated him is because he’s been a member of the post for years,” Beveridge said. In fact, Hall has been a member for 34 years. When Beveridge saw how Hall’s chronic obstructive pulmonary disease (COPD) was affecting him, he decided to help out any way he could.

Hall was beyond grateful.

Hall, 72, is from New Britain and has lived in Plainville for decades.

After graduating from E.C. Goodwin Technical High School, Hall decided to join the military. In 1966, he enlisted in the U.S. Air Force, a decision, he said, that was “one of the best I have ever made.”

Hall completed his basic training at Lackland Air Force Base in San Antonio, Texas, before becoming an aircraft mechanic. In 1967, he was deployed to Vietnam, where he worked on a fleet of C-123 transports. These aircrafts delivered supplies, evacuated the wounded and sprayed Agent Orange, a chemical weapon.

After four years of service, Hall was discharged in 1970. He and his wife Dolly lived in Delaware for three years. They then settled in Plainville where Hall worked as an auto technician for H&H Motors Volkswagen, now Crowley Volkswagen. He worked there for 26 years before he got a job in sales with AutoZone, where he worked for 13 years before retiring.

In 2009, Hall’s wife died from cancer. A few years later, in 2014, Hall himself was diagnosed with the disease. Though he is now cancer free, Hall must cope with COPD.

Hall, however, doesn’t let his illness stop him. He goes to the Plainville Senior Center, where he participates in many activities, such as the photography club.

Founded in 2000, House of Heroes works to improve the lives of veterans and their families by helping them maintain their home. The organization has helped more than 1,000 veterans across the country.