Plainville child's love for ice cream turns into love for veterans as he aims to raise $30,000

The kick off on May 27, 2019 Miles For Mills 5K where Michael handed out ice cream. In return if folks wanted to they gave him a donation. Michael was sponsored that day by Gifford's Ice Cream and Darlings Auto Group who provided the ice cream truck. It was an extremely successful day bringing awareness of his project and he raised $1,080 in 2 hours. Buy this photo 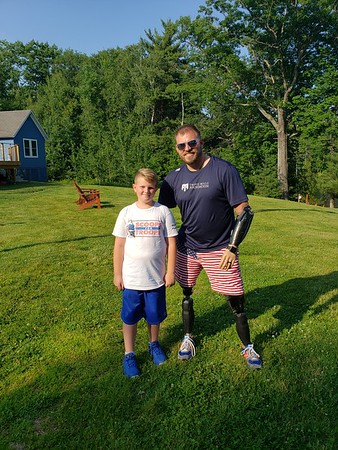 When 9-year-old Michael Ahern of Plainville was told that it would take $30,000 to host eight recalibrated veterans and their families at the Arden Retreat in Maine, he was unfazed.

“I don’t think he knew how much money that really meant,” his mother, Rebecca Karabin-Ahern said with a laugh. “But that’s the goal that he wants to fundraise for the families so that’s what we’re going to do.”

The idea for Scoops for Troops came after Michael met his first soldier while on vacation in 2017. The Ahern family was attending the Belgrade Fourth of July parade in Maine when Michael and his sister, Kara, 11, spotted a soldier across the street and asked if they could go over to thank him for his service. The soldier was Adam Keyes, who was staying at the Arden Retreat with The Travis Mills foundation for recalibrated veterans.

“He wasn’t shy like other soldiers could be. I understand a lot of them are shy because they don’t want to expose their injuries. But Adam didn’t act injured at all and I really liked talking to him,” said Michael.

Michael enjoyed their conversation so much that he began to ask questions about the retreat and the Travis Mills Foundation. Founded by Travis Mills and his wife, Kelsey, the nonprofit organization was formed to assist post-9/11 veterans who have been injured in active duty or as a result of their service to the country. The veterans and their families receive an all-inclusive, all-expenses paid, barrier-free vacation to Maine where they participate in adaptive activities and bond with other veteran families. Mills is a retired U.S. Army staff sergeant who was critically injured on his third tour of duty in Afghanistan by an improvised explosive device. He is one of only five quadruple amputees from the wars in Iraq and Afghanistan to survive his injuries.

The retreat also serves as an opportunity for the children to connect with other children whose parents have been injured while on active duty. This resonated with Michael so much that it inspired him to do something for the children.

“I wanted them all to have ice cream,” said Michael. “It’s my favorite pastime so I wanted to buy ice cream for everyone.”

The plan evolved into Scoop for Troops. To kick start it, Michael asked for donations rather than birthday presents this year in order to raise money for all the children to have ice cream at the local creamery. He raised $400 and nearly 80 children got ice cream over the summer. Now with his new goal of $30,000, he already raised just over $25,000 since his birthday on May 27 through setting up shop at numerous local events to raise awareness about his cause.

“It makes me very happy that the veterans can go to retreat,” said Michael.

With just a few thousand dollars of reaching his goal, Scoops for Troops will be hosting a dinner on Nov. 1 at the Southington American Legion. The food will be catered by Mission BBQ and there will be ice cream, music, and raffle prizes.

“We have been truly blessed and learned so much throughout this process,” said Karabin-Ahern. “This has become such a big part of our son and we’re extremely proud of him.”

All proceeds will go into supporting the veterans and their families. Tickets for the dinner can be purchased at Acme Monaco and Pawn Nation in New Britain, Amenta Barber shop in Berlin, and Karabin Farms in Southington.