Movie buffs, Magic the Gathering fans, gamers have new place to visit as The Stronghold opens in Plainville

Erica Drzewiecki | Staff One of the rarer movie titles available for rent at The Stronghold in Plainville. Buy this photo 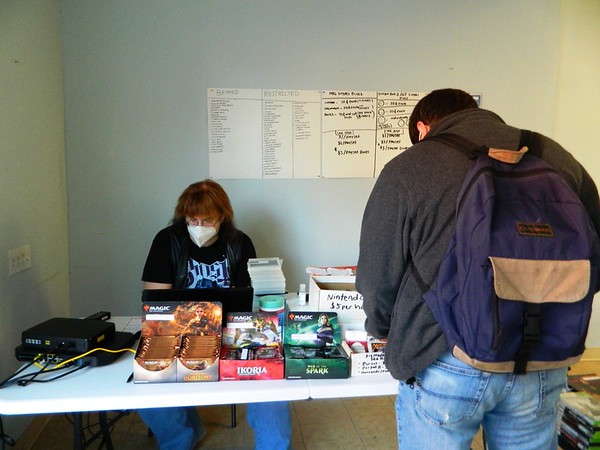 Erica Drzewiecki | Staff Brian Johnson makes his first sale of Magic the Gathering cards inside The Stronghold, which opened Monday night in Plainville. Buy this photo 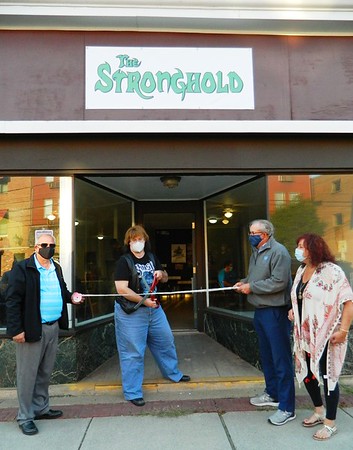 PLAINVILLE – A refuge for movie buffs, card players and gamers and a fortress protecting what they love: this is The Stronghold.

The newly-opened storefront at 13 Whiting St. in downtown Plainville is destined to become a haven for people who live for hard-to-find films, Magic the Gathering and retro video gaming.

Owner Brian Johnson and his business partners Reed Hansen and Rick Terasi discovered camaraderie when they became friends in college at Central Connecticut State University. While all studying to pursue careers in other industries, their hobbies kept their friendship alive, and now years later, have become the catalyst for their new store.

“It’s great to be here; we finally made it,” Hansen said Monday night, during a ribbon-cutting ceremony with the Plainville Chamber of Commerce.

The event was catered by D’Marie’s Pizza, located right next door.

As the Plainville reporter for The Bristol Press and New Britain Herald, Johnson has worked closely with local town and business leaders over the years. That’s one of the reasons why he settled on Plainville to open The Stronghold.

“It’s always awesome to see one of these vacant spaces repurposed with a new business,” Town Council Chair Kathy Pugliese said. “I’m very happy for Brian. I wish him the very best.”

“Basically it’s something I’ve wanted to do for years,” Johnson said of opening the store. “I’m going for the nostalgia niche specifically, with cards, movies, comic books and video games.”

State Rep. Bill Petit, R-Plainville, pointed out that while it’s a tough time to open a new business, The Stronghold’s niche could just be what drives its success.

“I think it will get a good response from people who are hunkering down right now,” Petit said. “He’s already got a great response on social media.”

As far as the name of the store, Johnson explains it like this: “The stronghold is a location in the storyline for Magic the Gathering and it also conjures up the general image of a castle in fantasy lore. Symbolically, a stronghold is a place of protection. In this case, we are gathering and protecting the past.”

For instance, his favorite era of Magic cards existed from 1993 to about 2003. These retro cards have recently reignited in popularity among collectors in their late twenties and thirties. They can be found in abundance at The Stronghold, along with designated lists of “banned” and “restricted” uses for certain cards in live games.

Middletown resident Matt Mucci got to know Johnson through their involvement in Magic cards.

“I’m pretty excited about it,” Mucci said during his first visit to The Stronghold. “People our age have rediscovered their collections now that they have the time and money. The nostalgia is driving up the value of these old cards.”

The space is still growing and evolving. A box of snacks sits on one table, beside a display of old gaming controllers. Toward the back of the store are a few neatly-stacked shelves with obscure films like 1978 sci-fi flick “Laser Blast” and Japanese-German hybrid “Prince of the Sun.”

Terasi is the movie guy, and plans on alternating titles every few months from his personal collection.

“People who miss going to a Blockbuster or Hollywood Video will appreciate the selection we have,” Terasi said. “We have things they’ve taken off the market and things you will never find on streaming services.”

Against another wall is an analog television set hooked up to a Nintendo 64 console, with a scattering of chairs in front of it. A variety of games are available to play for $5 an hour.

He also plans to do film screenings in collaboration with Cortlandt Hull from the Witch’s Dungeon Classic Movie Museum.

People who hang out for a while can appreciate chips and cookies for sale along with a fridge stocked with waters, soda and energy drinks, also known as “nerd fuel.”

New Britain resident Aaron Scales stopped by on opening night, thrilled to enter a shop catering to his interests.

“I’m quite a fan,” Scales said. “I used to go to a store similar to this when I was younger so it’s pretty nostalgic for me.”

For the latest deals and offerings, visit Facebook.com/TheStrongholdPlainville or call 860-550-2689.