Season Preview: Plainville football must learn to finish off opponents in order to take playoff step 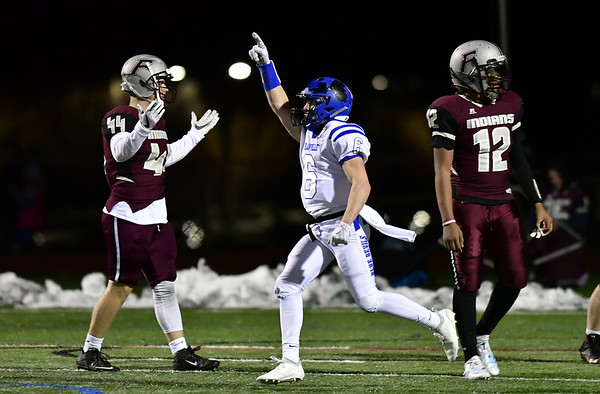 For the second straight season, the Plainville High football team entered its annual Thanksgiving Day game against Farmington riding a four-game winning streak and looking to end its season on a high note.

But penalties, missed opportunities, mistakes on both sides of the ball and a key safety resulted in an 18-17 loss, the Blue Devils’ fourth straight defeat to their neighbor to the north.

Within days, the Blue Devils began focusing on not letting it happen again.

“The way we finished still stung. It’s still on the kids’ minds a little bit,” Plainville head coach Tim Shea said. “It was a bit of a factor in the offseason, and it’s something we’ve been talking about, that you’ve got to finish. You’ve got to finish games, and we didn’t. So hopefully we’ve grown from that, and I’m eager to see what these guys do about it.”

Before that game, Plainville had enjoyed a fantastic season, going 6-4 - with two of its losses coming against Class S state champion Bloomfield and Class M state runner-up Berlin. A midseason 32-24 loss to RHAM also stung, however.

“It’s a sign of a good program that you win those [close] games, so we’re hoping to take that next step now,” Shea said.

Plainville returns for this season having graduated five all-conference players, along with eight other key starters.

Yet Shea says the Blue Devils are also bringing back enough key players to come back strong.

“We got a good number of guys back,” he said. “Yes, we graduated 13 very important guys, but we lettered 11 sophomores last year in significant roles.”

Among the returning starters are four linemen in Adrien Marcos, Dante Chambrello, Logan Caswell and Ty Pales, who are expected to team with Ryan Barker to form a solid front five.

“We’ve got some experienced guys,” Shea noted. “We’ve got a fair number of kids back.”

Christian Collin, an all-conference receiver last season in just his sophomore year, will take over under center.

“The big question is obviously quarterback,” Shea said, noting Collin did play as quarterback some last season, including as the starter against Bulkeley.

Senior Mason Sarra, a key defensive player the past three seasons who’s also been a successful kicker for the Blue Devils, is expected to step in as a featured running back.

“We’ll see Mason carrying the ball a lot this year,” Shea said. “We’re eager to see what he has offensively.”

As the season is set to begin, the Blue Devils are expecting to again be competitive every weekend.