Back on its home field, Plainville boys soccer routs Bristol Central in opening round off postseason play 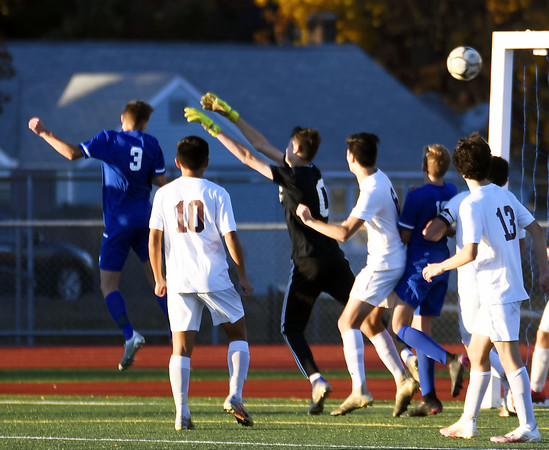 PLAINVILLE - The Plainville boys soccer team believes it’s at its best when there is room to run.

When the Blue Devils first played Bristol Central on its home turf back in October, they won in the form of a 5-0 rout. But last week, on the Rams’ home grass field in front of Bristol Central High School, Plainville was suffocated in a 4-0 loss.

Back at home on Tuesday afternoon for the first round of the CCC’s Region B tournament, the Blue Devils were free to run again and thrived in their more natural setting in a 4-1 victory to advance to the final round.

“I think we play best on a big turf field,” Plainville head coach Tim Brown said. “We’re a fast and speedy team. I’m not excusing that [4-0 loss], they deserved to win that game…but I think every goal they scored that last game motivated us more.”

The Blue Devils were off and running right away, fueled by that Nov. 4 loss where they allowed more goals in a single game than they had all season. Just six minutes into the first half, sophomore Trevor Rau dropped a centering pass back to All-State senior Pat Gryczewski, but his shot short hopped off the hands of freshman goalkeeper Harrison Ross in net and out of play. Rau handled the ensuing corner kick and sent a curling shot toward the net, which was redirected by Michael Ouellette and through the hands of the Ross, giving the Blue Devils an early 1-0 lead.

“It was definitely important getting that first goal,” Gryczewski said. “They got the first goal the last time we played them and it was hard to bounce back, especially on the field we played on, so we knew we had to come out stronger.”

Plainville had another corner 10 minutes later after a Gryczewski shot went wide, and the corner kick bounced toward Gryczewski in front of the net, who tried to field a high bounce and put a shot on goal. Instead, the ball deflected toward the right post where freshman Chase Gray, with his back toward the net, lifted his leg backward to send an improbable redirect off of his heel and into the back of the net to increase the lead.

“Honestly, it was unreal,” Gryczewski said of Gray’s fancy tally. “Sometimes you gotta get a little lucky I guess.”

Rau nearly made it 3-0 midway through the half with a curling shot toward the far post, but Ross made a diving stop and handled two more shots from Rau from straight on immediately after, as the Blue Devils continued to apply pressure. Moments later, Ross came up lame after making another save and left the game with a leg injury.

Central, already depleted in goalie depth due to previous injuries, turned to senior Christopher Osuch as its emergency keeper.

“He has never played goalie at the varsity level and I don’t think he did at the JV level either,” Rams head coach Nate Jandreau said. “But he’s as tough as they come and a great leader. I just looked at him and said, ‘Grab some gloves and grab a pinnie, you’re going in,’ and he didn’t hesitate. He hopped right up and was ready to go.”

Gryczewski kept the Blue Devils on the attack early in the second to quickly test Osuch, breaking free down the left side and firing a sharp-angle shot that rolled through the box and wide of the far post. After flirting with the team’s third goal, he finished the job eight minutes into the half when another break resulted in a flurry up front, and Gryczewski fielded a loose ball before burying it high in the back of the net to continue Plainville’s dominance.

The rout continued with 26:10 left in the half when Tucker Rau fielded a high bounce and sent a through ball to a streaking Trevor Rau, who tucked a low shot inside the far post to make it 4-0.

“We’re a tough team on turf with our fitness level and the way we work,” Brown said. “They run all day and they’re fast. I think you saw the difference today…I think it worked to our advantage.”

Central began to get out and run after the fourth goal and had a breakaway chance when Charles Pittman streaked toward the net, but his shot sailed high of the crossbar. Hayden Caudill continued the pressure for the Rams when he charged in from the left side, but Plainville goalkeeper Nate Masco slid in to knock it away before Caudill could get a shot off.

Central kept up the pressure and got on the board when a high shot from Tyler D’Agostino slipped through the hands of Masco and into the back of the net with 17 minutes to go, and the team maintained pressure through the final whistle, but the deficit was already too much to overcome.

“In the second half we started really coming at them,” Jandreau said. “We had a bunch of chances, but couldn’t convert many until it was too late.”

Plainville’s win secures a spot in the final against top-seeded Farmington, while Central will play a consolation match and an extra chapter in the city rivalry against Bristol Eastern later this week.

First round, CCC Region B Tournament